Marco Emilio Polo was an Venetian merchant, explorer, and writer who traveled through much of Asia along the Silk Road while recording his travels. His notes of Asian culture and technology became one of the earliest accounts that were available to the Western world. They included concepts that were completely unknown to Europe at the time, notably porcelain and Paper Money. He, along with his father and uncle, Niccolò and Maffeo Polo, also met the Mongol ruler Kublai Khan in Cambuluc.

In The Adventures of Super Mario Bros. 3 episode "The Venice Menace", Marco Polo is briefly mentioned alongside Marco Polo's Plumbers, who brought back the art of plumbing from China to Venice (mirroring Marco Polo's journey). 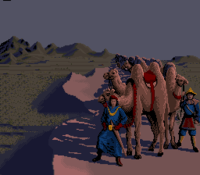 Marco Polo in the SNES release of Mario's Time Machine

In Mario's Time Machine, Marco Polo is depicted as in the Gobi Desert circa 1292, leaving Cambuluc, when his Print Block is stolen by a time-traveling Bowser. Mario later takes back the Print Block and travels back in time himself to return it, albeit without knowing the identity of its owner. If Mario still talks to Marco Polo, Mario attempts to introduce himself, but Marco Polo believes that he is a mirage caused by the desert. Due to Mario's short stature and garb, Marco Polo completely ignores him. Mario must then talk to the other inhabitants, all of whom easily talk about Marco Polo's experiences and history, and one of whom even gives Mario a book written by Marco Polo titled the "Book of Marco Polo" (although this book was titled Il Milione, was written by Rustichello da Pisa while he and Marco Polo were in prison, and was only published several years after the events of the game). Eventually, Mario confirms that the Print Block belongs to Marco Polo, and returns to the Gobi Desert to give it to him. Mario tells him that he forgot it, and he thanks Mario for returning it, as he can now return home and show the people there what he has collected from Asia. He also decrees that Mario is now an honorary member of his family, and dubs him "Mario Polo".