“Yes, Mario, it’s been another dramatic moment in my life. Perhaps one day it'll even be a play -- with Julius Caesar, Marc Anthony and me all living happily ever after!”
—Cleopatra, Mario's Time Machine

Cleopatra VII Philopator was Queen of the Ptolemaic Kingdom of Egypt for twenty-one years and its last active ruler. Originally ruling alongside her brothers, Ptolemy XII Auletes and Ptolemy XIII Theos Philopator (while also marrying them, as was tradition), she was forced to flee from Egypt after Auletes died and Theos Philopator took complete control for himself. However, after Julius Caesar routs Theos Philopator, Cleopatra is coronated once again in 47 BC at Alexandria. At this time, Bowser steals her all-important Staff (or her Throne in the NES version), which is necessary for her to become queen, and Mario travels back in time to return it to her, at least according to Mario's Time Machine.

According to Cleopatra's in-game biography, Cleopatra's brother "Ptolemy XII" did not want to share the throne with her, so he banished her from Alexandria. This lasted until Julius Caesar, who stood as Egypt's guardian, helped restore her to the throne, thus letting her complete her second coronation in 47 BC. Soon, Caesar falls in love with Cleopatra, and the two of them have a child named Caesarion. However, on March 15, 44 BC, Caesar was assassinated by members of the Roman Senate, which led to Marc Anthony becoming one of Rome's new leaders. As Cleopatra was attracted to leaders with power, she married him, resulting in three kids. However, after a Roman civil war in which the majority of Anthony's army was defeated, Cleopatra and Anthony commit suicide together. 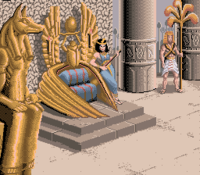 Cleopatra in the SNES release of Mario's Time Machine

In Mario's Time Machine, Cleopatra is lounging in her throne room in Alexandria sometime during 47 BC when she is visited by Mario, who had just traveled back in time to return her Staff without knowing that it belongs to her. As such, when he first meets her at her throne, he only asks if she is ready for her coronation, and she says yes and promptly tells him to leave, as she needs to be prepared by her handmaidens. Mario only learns of the Staff's true owner by talking to various other people within Alexandria, including Julius Caesar and one of Cleopatra's guards and maids, who all freely discuss Cleopatra's history and life experiences. Eventually, Mario finally confirms that the Staff needs to be given to her, and visits her once more. Mario asks her if she was looking for the Staff as he gives it to her, and she dryly replies that she was looking for the one object that grants her unquestionable rule. Cleopatra describes the whole situation as merely "another dramatic moment" of her life, and then wonders if one day, her life might be turned into play where she, Julius Caesar, and Marc Anthony live happily ever after (referencing the William Shakespeare play Antony and Cleopatra).

In the NES version, she can be found wandering in Egypt in 31 BC. If Mario talks to her, she hints that she needs her Throne without outright saying it. Mario must return her Throne to the correct place to complete the stage. Cleopatra is also the only historical figure in the NES version who does not use an edited Mario sprite.