Tommy Lasagna, usually referred to as simply Mr. Lasagna, is the somewhat impatient coach of the Brooklyn Dodgers baseball team. He currently has plans to open up a new restaurant in Brooklyn. Fittingly, he shares his last name with a type of pasta. He is portrayed by actor Joe Bellan. 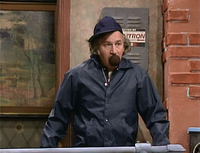 One day, Tommy Lasagna phones Mario at Mario Brothers Plumbing, and tells him that he would be coming over soon. Before he even arrives, a meatball that Mario had been practicing his pitching with flies out a window and lands right in his mouth. Upon his entrance, Mr. Lasagna is unable to speak to Mario and Luigi until Luigi pulls the meatball out of his mouth.

Although Mr. Lasagna explains to Mario and Luigi that he is not there to recruit them for his baseball team, they are eager to show him their stuff, and they get to work with moving some furniture around to make room for a pretend baseball diamond. Mr. Lasagna assigns Mario to pitch while Luigi is to catch, and has to wait around until Mario is finally ready. As Mario throws the ball over Luigi's head, Mr. Lasagna traces it on his radar, and it comes up with the reading "Don't give up your day job". 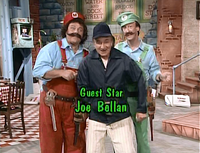 Some time later, Luigi winds up on top of Mr. Lasagna, while he has his hand on a pizza box being used as home plate. Mr. Lasagna struggles to get up and sits down at the table, telling Mario and Luigi that he is not there to recuit them for his team; instead, he tells them that he is opening a new restaurant in town, and wants to sample the famous Mama Mario meatball recipe. Mr. Lasagna takes a bite out of one, and spits it out, complaining that it tastes like horsehide and string.

Mr. Lasagna decides to take the meatballs with him as he gets ready to leave, and is asked by Mario if he is going to feed them to the team. Mr. Lasagna says that the meatballs are only good for using in place of real baseballs, and tells Luigi that he needs them to get out of the cellar. Luigi asks if he means the bottom of the league, and Mr. Lasagna states that he actually means their basement apartment.

Before Mr. Lasagna can leave, he is asked by Mario what he and Luigi can do, and he tells them that he did have something they can do at the ballpark. Mario figures that it has to do with pitching, but Mr. Lasagna corrects him, stating that the two of them can toss peanuts, as he pulls two bags of them out of his pocket and tosses them to Mario and Luigi.