Later, Mario Joe and Luigi Bob begin to relax at Mario and Luigi's table, eating large amounts of food from the fridge. After some small talk involving what pepperoni is and where it comes from, Mario Joe and Luigi Bob hear the doorbell of Mario Brothers Plumbing; and after some hesitation, yell for whoever is at the door to come in. A woman enters and asks if Mario Joe or Luigi Bob have a faucet, as she is in need of a new one. As Mario Joe tells the visitor that he is not sure and prepares to inform her is not actually Mario, Luigi Bob stops him, saying he is not sure if there was a faucet in the plumbing shop at the moment. As the visitor broods over her bad luck, Mario Joe tries to cheer her up, prompting the visitor to introduce herself as Ellie Mae and ask their names in return. Stuttering, Luigi Bob introduces himself as Luigi, while Mario Joe introduces himself as Mario. Upon learning the two's supposed names, Ellie Mae tells Mario Joe and Luigi Bob that they are just the kind of plumbers she's looking for: country bumpkins, like her. 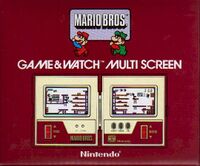