“Oh, grazie Mario! Now I can finish this portrait of Mona Lisa! I should have known I could count on a fellow Italian! Call me Leo!”
—Leonardo da Vinci, Mario's Time Machine

Leonardo di ser Piero da Vinci, mainly known as Leonardo da Vinci, was an Italian polymath of the High Renaissance. He was active as a painter, draughtsman, engineer, scientist, theorist, sculpter, and architect, where he explored countless areas of interest, earning him renown as an exemplary polymath. He painted numerous works of art, including Mona Lisa, The Last Supper, and Lady with an Ermine, while also making several investigations in various fields of science. His notebooks contained descriptions and designs for inventions that could only be realized in the future, including helicopters (which was then called "aerial screws"), tanks, parachutes, cannons, and much more.

Leonardo was born on April 15, 1452, in the village of Vinci, during a period dubbed the Renaissance that welcomed an intellectual and artistic reawakening. As a child, he served as an apprentice painter in Florence, later finding work in Rome and Milan as well. In 1505, he operated in Florence with his own workshop, where he was working on completing his Mona Lisa.

In the The Super Mario Bros. Super Show! episode "The Painting," Leonardo is stated to have copied The Last Supper from his master, Leonardo da Vinci Rooney, by the art appraiser Howard Stevens. Rooney's painting, The Second-to-Last Supper, was the original, and Leonardo simply copied his master's idea. Leonardo da Vinci Mahoney, a fellow student, also plagiarized Rooney's original painting while signing his master's name on it and attempting to pass it off as an original.

In the The Adventures of Super Mario Bros. 3 episode "The Venice Menace," the Gondolier briefly mentions Leonardo while rattling off a series of famous people's names. 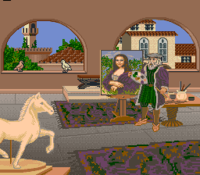 In the Super Nintendo Entertainment System release of Mario's Time Machine, Leonardo's Notebook is stolen by Bowser after the latter goes back in time using his Timulator, wanting to create a museum using stolen artifacts. Mario later takes the Timulator and the Notebook and travels back in time to Florence in order to return the Notebook (without actually knowing that the Notebook belongs to Leonardo). When first visiting Leonardo, Mario's only option is to say that he is lost, though Leonardo angrily tells him to leave as he has lost his Notebook. Leonardo can be given his Notebook only once Mario questions the locals, including Michelangelo Buonarroti, about the area and absolutely confirms that the Notebook belongs to Leonardo. Once Mario knows Leonardo's identity and gives him his Notebook, Leonardo thanks him, saying that he can finally complete the Mona Lisa, and also asks Mario to call him "Leo." Mario then asks about the lack of smile on the Mona Lisa; Leonardo explains that she actually has a subtle smile, one that he hopes causes people to wonder what she is smiling about for generations to come.