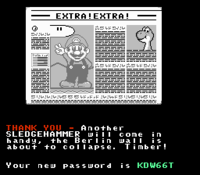 The Sledgehammer is an item in the NES release of Mario's Time Machine. It is one of the tools that was used when tearing down the Berlin Wall in 1989. However, before it could be properly used, Bowser steals it and places it inside of his museum, where it is kept alongside other time-displaced items and protected by Koopas. It is then taken by Mario after he defeats the Koopas, at which point he travels back in time to the Berlin Wall circa 1989 to return it. He then proceeds to leave it in front of a guard post. After returning the Sledgehammer, a news article appears that thanks Mario for toppling the Berlin Wall.