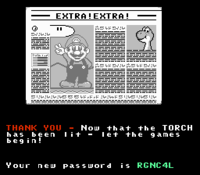 The Torch is an item in the NES release of Mario's Time Machine. It is the original torch used to light the Olympic flame in the first Olympic Games in ancient Greece. Before the flame could be properly lit, Bowser travels back in time and steals it, then places it in his museum alongside other stolen items and some Koopa guards. Mario then enters the museum, takes back the Torch, and time travels to 776 BC to return it. In the time period, a nearby man also tells Mario that the flame needs to be lighted. Mario proceeds to do the honors of lighting the flame himself, and a newspaper article cheers on the start of the Olympic Games.