“I hate to leave, but I've never had such an elegant view through the rear-view mirror.”
—Lakitu, Mario Kart Tour News Vol. 3: Where did Lakitu go?[1]

Paris is a city on Earth. It is the capital and largest city of France. It is featured in The Adventures of Super Mario Bros. 3, all versions of Mario is Missing!, the PC versions of Mario's Time Machine, Mario Kart Tour, and Mario Kart 8 Deluxe. The Eiffel Tower is the city's most famous landmark.

"Reptiles in the Rose Garden"[edit]

Paris is first mentioned in The Adventures of Super Mario Bros. 3 episode "Reptiles in the Rose Garden". Luigi mentions that Bowser is planning on attacking several Real World cities, including Paris, with the Doomship. Fortunately, Mario and Luigi thwart Bowser's plan before he can even leave.

The city is later seen briefly in the episode "7 Continents for 7 Koopas". Bowser orders his children to each take over one of the Real World's seven continents, and assigns Kootie Pie Koopa to take over Europe. Kootie Pie then travels to the Louvre museum, where she uses her magic wand to transform all the paintings into paintings of herself. Mario eventually shows up to defeat Kootie Pie, and restores the paintings to their proper forms. 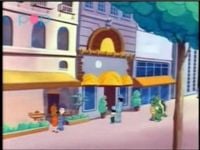 A street in Paris, as seen in The Adventures of Super Mario Bros. 3 episode "Super Koopa."

Paris is then featured in the episode "Super Koopa", with most of the episode taking place there. Kooky von Koopa creates a magic pendant for Bowser, which can grant him the Mario Bros.' Power-Ups. However, the pendant only works in the Real World, so Bowser kidnaps Luigi and takes him through a Warp Pipe leading to Paris.

In Paris, Bowser is able to use the pendant to become Raccoon Koopa, allowing him to fly. He quickly ties up Princess Toadstool, tying her to the Eiffel Tower. Bowser then turns into Frog Bowser, in order to pursue Mario, Luigi and the captain of a submarine and capture them. He then throws them in the Bastille and tells some of his kids to come to Paris and run amok. Kootie Pie tries on many bizarre dresses at a clothing store, while Hip Koopa and Hop Koopa replace paintings at the Louvre with their own "masterpieces".

Princess Toadstool manages to slip a message to Toad through the Warp Zone connecting the Mushroom Kingdom to Paris, telling him to bring lots of Power-Ups to Paris in order for Mario and Luigi to fight Super Koopa. Toad then sneaks a cake into the Bastille that contains a Super Leaf in a Brick Block, allowing Mario to become Raccoon Mario and escape from prison by tail-whipping the wall.

When a Sledge Bro informs Bowser about what happened, he becomes Raccoon Koopa to deal with Raccoon Mario and Raccoon Luigi. While he is distracted, Toad rescues Princess Toadstool from the Eiffel Tower. After some more fighting, Mario and Luigi manage to defeat Bowser by overloading the Power Pendant, sending the Koopa King back through the Warp Zone, where his kids follow. Mario then comments that Paris would not be seeing the Koopas ever again, and that they could not have saved the city without Toad's help. 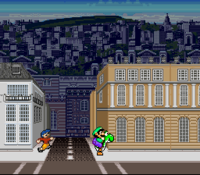 A Parisian street in the SNES version of Mario is Missing! 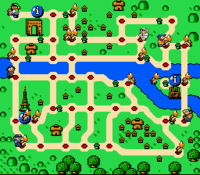 The map of Paris in the SNES version of Mario is Missing!

Paris appears in all versions of Mario is Missing!. In the PC and SNES versions, it is part of the second set of levels (though the SNES version's fewer level sets mean it is further into the game). In the NES version, it is instead in the third pair of levels out of seven, placed alongside Tokyo.

In all versions, Paris is one of many cities that Bowser has ordered his Koopa Troopas to burgle priceless artifacts from: namely the Tricolor flag from atop the Eiffel Tower, the Eternal Flame from the Arc de Triomphe, a bell from the Cathedral of Notre Dame, and (exclusively in the PC version) the Mona Lisa from the Louvre. Luigi pursues the Koopas to the city and must retrieve the artifacts and return them to their proper place.

Like all cities in the game, Luigi must also call Yoshi to his location using the Globulator and get rid of the Pokey blocking the city's exit. To do this, he must first deduce where he is from hints given by people in Paris:

Paris appears exclusively in the PC release of Mario's Time Machine, as one of the locations that Mario visits as he travels back in time to return the items stolen by Bowser. Specifically, he travels to Paris circa 1885, as he needs to return the Flask that Bowser stole from Louis Pasteur just as he was about to create the rabies vaccine. Mario talks to some of the city's inhabitants, including a tailor, a waiter at a café, and Pierre Paul Emile Roux (Louis Pasteur's colleague), about the owner of the Flask, and he eventually gets pointed to his lab. He visits Louis, returns the Flask, and time travels away. 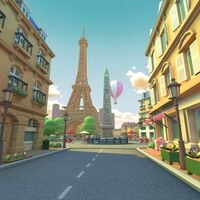