The episode begins with Luigi finding a treasure map to the Doom Dancer Music Box in Mushroomland Central Library. Princess Toadstool later gets Luigi, Mario, and Toad to help her get the Doom Dancer, which makes anyone who hears it dance fast or slow according to how fast it is cranked. Mario proposes that the Doom Dancer can keep the Koopa Clan under control. The group then sets out to get it in Dark Land's Temple of Gloom. When they arrive, a Dry Bones hears their plans and goes to tell King Koopa at Kastle Koopa. After telling him a few times (King Koopa has a cold), King Koopa sends Cheatsy Koopa, Big Mouth Koopa Jr., and Bully Koopa to get the Doom Dancer before the Mario Bros. do.

Mario and Co. face a problem getting over a wide gap. Toad suggests that Mario break some blocks to get some Super Leaves, which Mario does. Turning into their Raccoon forms, the group flies over the wide gap. They run through a field of giant spikes popping down from the cave ceiling. After getting through the spike field, two Koopa statues turn them all back into their normal forms. 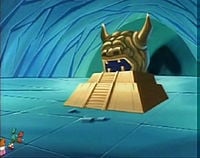 The Temple of Gloom.

Cheatsy, Bully, and Big Mouth are later seen clearing the rubble, and following the gang into the Temple of Gloom. After narrowly avoiding beams from many Koopa statues, Mario and the gang reach a door. Princess Toadstool looks at the map and tells the group that the Doom Dancer is in the Inner Temple. The Koopalings, who are eavesdropping, realize that the Doom Dancer exists and is not a myth like their father always thought. The Koopalings decide to let Mario get the Doom Dancer, then Big Mouth says they should ambush them. Bully tells Big Mouth to give him his string. Big Mouth objects because it belonged to their great grandmother and attempts to tell an unneeded story about her. Bully covers his big mouth before he starts while Cheatsy steals the string and creates a trip-wire. 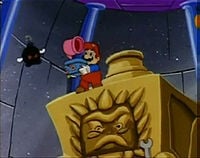 Traps going off after Mario grabs the Doom Dancer. 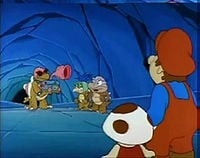 Bully with the Doom Dancer.

When the group gets to Kastle Koopa, King Koopa asks Bully to give him the Doom Dancer. Bully refuses, saying that he is going to use it to rule the entire world, starting with his father. However, King Koopa's cold prevents him from hearing the music, making him invulnerable to its magic. Koopa then takes the Doom Dancer, and cranks it, making everyone "Do the Koopa". King Koopa then says that he is going to make the whole Mushroom Kingdom dance to their doom. The Doom Dancer is powerful enough for its power to spread into Desert Land where a Sphinx, the trees and even the enemies start dancing.

King Koopa then flies over various parts of the Mushroom Kingdom on his Doom Ship, making everyone "Do the Koopa", even statues and plants. Mario then gets some Plumber's Putty from Luigi, and jams them in his ears, blocking out all sound. Pretending to dance, Mario slowly goes towards Koopa, tackling him and sending the Doom Dancer into the air. A struggle for the Doom Dancer follows, which ends up in the crank breaking off from the rest of the Doom Dancer. Attempting to crank it with his claw, Koopa gets his claw stuck. The Koopalings help Koopa get it off, but send the Doom Dancer crashing onto the landscape below, where it hits a Goomba on the head and breaks.

King Koopa, Bully, and Cheatsy then start arguing over whose fault it is for breaking the Doom Dancer. Mario and the group jump into the Warp Pipe and get warped to Mushroom Castle, where the episode ends. 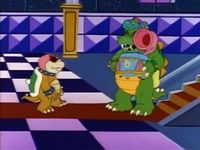 The error in which Bully's shell is colored green. The error showing Toad with a happy expression.