Mario, Luigi, Princess Toadstool and Toad are eating pasta for lunch outside Toad's house. When Mario looks around, bored, he is shocked when he sees King Koopa and the Koopalings walking towards them, holding a white flag. To the surprise of Mario and his friends, Koopa announces that he is giving up his evil ways and surrendering his kingdom, and is leaving the Mushroom Kingdom forever. To try and make up for all the misery that he has caused, he gives Princess Toadstool the key to Kastle Koopa as a donation to charity. Koopa then uses his magic wand to create a Warp Pipe which he and his kids exit through. 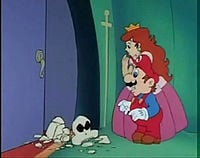 Mario and the princess greeted/shocked by a falling Dry Bones. 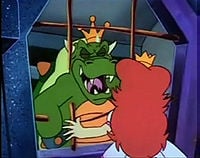 Standing outside the door to the dungeon are King Koopa and Cheatsy. Koopa mocks his new guests, and Princess Toadstool comments that she never should have trusted him. Koopa tells Cheatsy that he is going to give him more lessons on lying and cheating, but his son does not hear him, as he is listening to a Walkman (which is ironically playing the underground theme). It is not until he pulls the headphones off of Cheatsy's head that Koopa gets his son's attention. He then tells Cheatsy to pay attention while he cons Princess Toadstool out of the Mushroom Kingdom. Koopa presents a contract to Princess Toadstool, but she refuses to sign it. To help get Princess Toadstool to change her mind, Koopa pulls a lever, releasing about 25 Bob-ombs into the dungeon. Knowing that Princess Toadstool and Mario are trapped with the Bob-ombs, he figures that they will surrender soon. 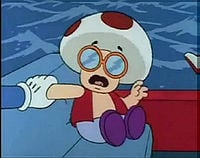 Meanwhile, Luigi and Toad are waiting in a boat outside Kastle Koopa (possibly on the Mushroom Sea). Toad comments that Mario and Princess Toadstool have been inside too long, and that they should go and investigate. Luigi then points out that they have to sneak in through the drainpipe. Thinking that Luigi was being sarcastic, Toad is startled when Luigi gets ready to jump in the water, bringing him with him. Luigi manages to swim past several Bloobers, but only Toad notices the Boss Bass that is chasing them. As Luigi unscrews the grating on the drainpipe, Toad points out the Boss Bass to him, scaring him into unscrewing the grating faster. Luigi and Toad manage to enter the drainpipe right before the Boss Bass reaches them.

Back in the dungeon, Cheatsy mentions that he likes his father's "Big Bang" theory, and Koopa remarks that in order to be a big cheat, one needs to "double-trick, double-deal and double-cross." The double-cross bit gives Cheatsy an idea, but he keeps it to himself. 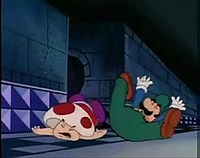 Luigi and Toad falling over from the Sledge Brothers's tremor.

Koopa tells Princess Toadstool that her friends will be blown up if she does not sign over the kingdom, and she agrees, on two conditions: one, that they move to the throne room, and two, that King Koopa puts on something formal to wear. Koopa tells Cheatsy to take Princess Toadstool to the throne room while he finds something to wear. Cheatsy then thanks him for his lesson in cheating, and his father says that one day he will be just as big a cheat as himself. As Koopa walks off, Cheatsy comments to himself that that day will be today, and orders the Sledge Brothers to take the prisoners to his bedroom, where Mario, Luigi and Toad get locked in his wardrobe. Cheatsy tells Princess Toadstool to sign the kingdom over to him, or else he will have her friends sent back to the dungeon with the Bob-ombs. 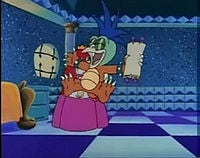 Cheatsy ecstatic that Princess Toadstool had "signed" the contract.

Princess Toadstool signs the contract and hands it over to Cheatsy, who gets so ecstatic over the whole deal that he runs off to tell his father that he double-crossed him. With Cheatsy gone, Princess Toadstool breaks a lamp, causing the Sledge Brothers to come running in. Princess Toadstool dodges their sledges, which hit and break open the wardrobe, freeing Mario, Luigi and Toad.

The four heroes run out of Cheatsy's bedroom dodging the attacks of the Sledge Brothers. As they continue down the hallway, they are attacked by two Fire Chomps. Mario and Luigi take care of the Fire Chomps by pushing them out a window, and they fall down into the water. Looking out the window, Toad comments that they would be free if they could fly. Toad's comment then gives Mario the idea to start bashing the blocks in the ceiling, in hope that he will find some Super Leaves. 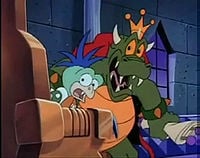 King Koopa and Cheatsy shocked to see Mario and his friends escaping.

At the same time, Koopa enters the throne room wearing a red cape, but Cheatsy comes running in and sits down on the throne. Koopa yells at Cheatsy, but Cheatsy tells him that he is the new king of the Mushroom Kingdom. Cheatsy shows him the contract and takes his crown, telling him that he can get a job cleaning the royal stables, as a reward for giving him the idea to cheat in the first place. Having read the contract thoroughly, however, Koopa takes back his crown, and points out that Princess Toadstool had actually drawn a goofy face instead of actually signing the contract. Koopa claims that he will get Princess Toadstool to sign the contract properly, and asks Cheatsy where the prisoners are. Cheatsy tells him that they are locked in his bedroom, but they are both surprised to see Mario and his friends, all with Raccoon Power, flying outside the windows of the throne room. Unable to stop the good guys, Koopa starts growling at Cheatsy, who tells him that he was only doing bad like he taught him. Koopa then starts chasing Cheatsy around the throne in circles, telling him that he is "really going to teach him a lesson now."