In Kansas, USA, a family of four is traveling to Wild Waldo's One-of-a-Kind Amusement Park in a station wagon. After the daughter of the family, Missy, continues to pester her father, Norman, about whether they are at the amusement park yet, Norman, flustered, stops the car; then sarcastically says they are here and to be quiet. Norman starts to drive again, only to be asked by his son, Bud, whether or not they are lost, to which Norman responds with a somewhat hesitant no. As Norman continues to drive along, his wife tells Bud and Missy that the amusement park is still far away and to simply enjoy the scenery, as it will take them at least another hour of driving to arrive. After this is said, Norman drives the station wagon through a tunnel, which is actually a Warp Zone. 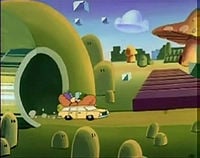 The family in the Mushroom Kingdom.

Once the Warp Zone is driven through, the family find themselves in the Mushroom Kingdom; as Bud and Missy look around, bewildered, at their new surroundings, their mother calms them down and assures them that Norman, who believes he has somehow entered Iowa, will find a gas station and ask for directions. After his wife tells Bud and Missy this though, Norman, distracted by all the new scenery, accidentally crashes the car into a wall of Blocks. As the car's engine begins to steam, the family is left to panic as Norman, who has lost control of the car, tries desperately to steer it. As the car swerves out of control, it narrowly avoids hitting a nearby Mushroom boy who was fishing by a river; fortunately, the Mushroomer jumps into the river to avoid the car, which he perceives to be a monster.

Eventually, the car begins to slow down and eventually crashes into another wall of blocks near the river before stopping completely. With the car having finally stopped, Norman gets out of it to inspect the engine. Opening the hood of the car, Norman is shrouded by a large amount of smoke and begins to cough, which frightens the nearby Mushroomer from before who, after being seen and yelled to by Norman, runs away frantically, claiming that aliens have come.

Elsewhere, Hip and Hop Koopa are in the process of setting up a prank, placing a mirror in front of a wall to make it appear as if there is an opening in the wall. As Hop steadies the mirror though, Hip begins to wonder if the prank will work, thinking if there is anybody dumb enough to fall for it. Directly after Hip says this, the Mushroom boy suddenly runs directly into the wall and falls to the ground, dazed as Hip and Hop praise themselves on having pulled another successful prank. 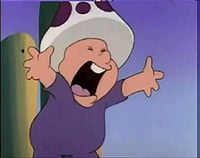 The Mushroomer screaming aliens to the Koopaling twins.

Recovering from running into the wall, the Mushroomer proceeds to tell the nearby Hip and Hop to run, saying something about fire belching with four eyes; the Mushroom boy's ramblings cause a somewhat nervous Hip and Hop to ask what he is talking about, getting the response from the Mushroomer that horrible aliens are coming. This revelation about aliens causes a scared Hip and Hop to frantically run away, screaming.

At Kastle Koopa, Hip and Hop, still screaming and claiming that something is coming, are knocked backwards by Bully, who asks them who is coming. Hip and Hop proceed to tell Bully about the aliens, which is enough to even terrify Bully, prompting him to tell Kooky about them, who tells Big Mouth about them, who tells Kootie Pie about them, with the Koopalings' stories becoming more and more exaggerated. After being told of the aliens by Big Mouth, Kootie Pie runs to King Koopa's throne room, where she tells her father that zillions of heavily armed, fire spewing aliens are going to attack the castle before breaking down into tears, screaming that they are all doomed and that she does not have anything to wear. As Kootie Pie sobs in front of him, a shocked Koopa proclaims that he will have to attack the aliens, before they get to him. 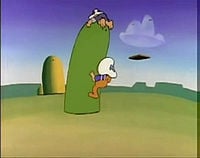 In the Mushroom Kingdom, the Mushroom boy is still in the midst of yelling that aliens are coming, causing anyone nearby to instantly panic and make several, somewhat futile, attempts to hide. After being alerted to about the aliens, two Mushroom women, in a panic, accidentally jump into one another and are knocked to the ground. As a crowd gathers near the two fallen Mushroomers, Mario and Luigi appear and help the two to their feet, asking if anyone has actually seen any of these aliens. One of the Mushroom ladies responds she has not actually seen the aliens, but tells Mario and Luigi that she was told about them by someone else, who in turn was told by someone else, which makes Mario question the credibility of the Mushroomers' alien story. 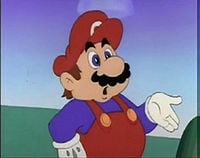 Mario concluding that the "aliens" are real worlders.

As Mario has his doubts about this story, he asks if anyone actually saw these "aliens". The Mushroom boy claims he did, and Mario asks to please describe what was seen. After the Mushroom boy tells Mario and Luigi about the aliens, Mario surmises that what the boy saw was real worlders, like him and Luigi, though the Mushroom boy still claims that what he saw was aliens. After the boy says this, Mario tells Luigi that they had better do an investigation on what is really going on.

Up above, Koopa's Doom Ship suddenly materializes and floats through the air. Onboard the Doom Ship, Koopa is instructing Kooky to, when the "aliens" are seen, blast them with all the artillery the Doom Ship has. As Kooky says that no aliens are going to conquer their kingdom, Koopa tells Kooky he cares more about survival than the kingdom. 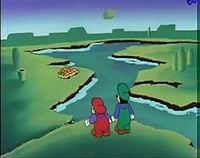 Mario and Luigi inspecting the car.

At the river, Missy is asking Norman if he has discovered where they are yet, to which Norman says no, having discovered they are not in Iowa, but that they might be in Nebraska. As Norman fidgets with his map, Mario and Luigi climb a hill and see the family's station wagon, at the sight of which, Mario tells Luigi that he was right, the aliens are nothing more than humans. As Mario tells Luigi this though, Luigi tells Mario to look upward, since Koopa's Doom Ship has suddenly appeared. 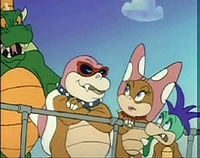 Bully explaining to Kootie that the aliens are tricking them.

Up on the Doom Ship, Koopa, Bully, Kootie Pie, and Cheatsy Koopa are all overseeing the attack on the station wagon. Suddenly, Bully notices Mario and Luigi riding the top of the car, while Kootie Pie also notices that the aliens they are attacking look like humans. After Kootie Pie and Bully mention these oddities to Koopa, he assumes that the evil aliens have taken on a human form to trick Mario and Luigi into helping them and also orders that Chain Chomps will be launched from the Doom Ship.

At Koopa's command, four Chain Chomps are launched from the cannons of the Doom Ship and are sent plummeting downwards into the river below. Landing at the bottom of the river, the Chain Chomps stretch upwards and deflate the raft the station wagon is on with their teeth, causing it to slowly deflate and sink. As the raft begins to go underwater, the Chain Chomps grab its tires in their mouths and begin to tug it underwater quicker. 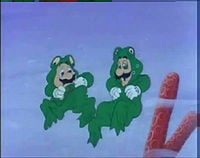 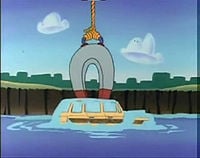 The magnet grabbing the car.

Unfortunately, the station wagon is grabbed by a large magnet lowered by the Doom Ship, which begins to tow the car and the family inside, to Kastle Koopa, leaving both Mario and Luigi to watch them go in shock.

At Kastle Koopa, King Koopa and the Koopalings are beginning an interrogation of the confused family. Koopa demands that the family change to their true forms: horrific alien monstrosities, which only confuses the family more and prompts Norman to begin trying to question and threaten Koopa. Kootie Pie, becoming annoyed, tells Koopa that the aliens are still trying to trick them by staying in human form; Kooky reassures Kootie Pie and Bowser though, saying that he can get all the information needed from the family by using his new Transmutational Brainwave Analyzer, which can scan the families' minds and reveal their plans of conquest, which can then be used by Koopa to conquer the Mushroom Kingdom; the magnitude of Kooky's plan actually causes Koopa to cry tears of joy at how proud he is of him. 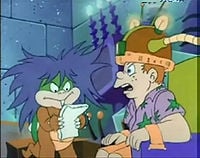 In his lab, Kooky has hooked the family to bizarre helmets which are connected to a machine, which deposits a paper which Kooky grabs. As Kooky begins to look at the paper, Norman, somewhat hysterical, demands answers and that he and his family be set free. As Norman continues to yell at Kooky, a nearby wall is blasted apart by Mario and Luigi, who have donned Raccoon Suits. 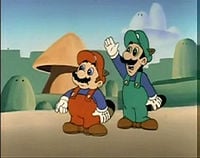 Luigi telling the family to have a safe trip.

At the Warp Zone tunnel, Mario and Luigi tell Norman to just keep driving straight ahead and he and his family should be back in the real world. Thanking Mario and Luigi for all their help and asking them to come see them if they ever come to Wichita, the family leaves through the Warp Zone. The Mushroom boy from before, having seen them leave, begins to run and yell to everyone nearby that the "aliens" have left.

At Kastle Koopa, Koopa is telling the Koopalings that it does not matter if the aliens are gone and says that Kooky got all their plans. Kooky, somewhat embarrassed, tells him that the aliens were not actually aliens; they were just humans who were traveling to Wild Waldo's One-of-a-Kind Amusement Park. This revelation causes Koopa to angrily shout who caused this alien panic in the first place. The Koopalings, not wanting to get blamed, proceed to point to one another and yell "They did!", which causes Koopa to slap himself in the face in frustration.

In Kansas, Norman and his family are driving down a road when Missy quickly asks Norman "Are we there yet?", which causes Norman to slap his own face in frustration as well.