The episode begins as King Koopa swiftly pilots his Doom Sub through the ocean, planning to conquer the underwater world of Mertropolis, which he plans to turn into Kooptropolis. Already aware of his plans, Mario, Luigi, Princess Toadstool, and Toad pursue the sub, aided by Frog Suits.

Hip and Hop Koopa notice them and inform Koopa, who orders his Rocky Wrenches to attack. The Mario Bros. manage to catch some of the wrenches that are thrown at them, and throw them back, damaging the Doom Sub's propellers. The submarine spins out of control, firing strange beams in all directions. As Mario tries to protect the Princess from the blasts, he is hit by one of them himself. His body is encased in a block of cement, which causes him to begin sinking.

When all seems lost, a mermaid named Holly Mackerel comes out of a Warp Pipe and swims over to save Mario. She introduces herself as the mermaid princess of Mertropolis and brings Mario to the submerged city, which is covered by a dome. Luigi and the others follow, and try their best to revive the now-unconscious Mario. When he regains consciousness, Holly tells him that her fortune teller claimed a frog prince would "come hopping into my life". Believing Mario to be that prince, she falls in love with him and tries to get him to marry her. After some brief dodging and running away, Mario directly confronts her and tells her that they just are not compatible. Leaving her in tears, he and the rest of the team head back to the pipe leading to the ocean. 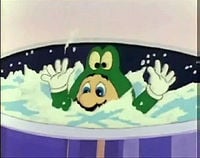 Frog Mario in the water, unable to swim.

However, before entering the pipe, Mario cannot bring himself to go back. His near-death experience has made him dreadfully afraid of the water, and he refuses to leave. The others try to convince him to go, but he makes it clear that he will not go into the water ever again. Suddenly, the Doom Sub appears over the city, and Koopa shouts his demands through a loudspeaker, declaring that if the city is not surrendered in seventeen minutes, he will destroy it. King Mackerel shows up, and worries about Mertropolis being destroyed.

Mario and friends looking towards the Doom Sub.

Luigi, Princess Toadstool, and Toad jump into the exit pipe, but Mario is still too afraid. Toadstool tries to convince him that everything will be okay, but it does not do any good. Suddenly, two Boomerang Brothers enter through the pipe and start attacking the city. Mario defeats them, but just as soon as they are gone, more arrive. After Mario's group battles the small troop of Boomerang Brothers, Koopa announces that he has more to come. As before, Mario is too scared to leave the city. Princess Toadstool tells him to stay behind, while she, Luigi, and Toad stop the Doom Sub. 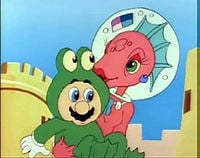 Holly sees that Mario is still there, and misinterprets his staying as a sign of love for her. King Mackerel still sees Mario hanging around, and warns Mario about King Koopa's threat. Holly, who was mistaking a Warp Pipe for Mario's "solid build", notices and introduces Mario to her father, and plans to prepare a wedding ceremony, much to Mario's dismay.

Onboard the Doom Sub, Hip and Hop spot Luigi, Princess Toadstool, and Toad returning, and Koopa responds by firing Nasty Nets at his three foes, capturing all of them. Back in Metropolis, Holly tells Mario about how she is inviting all of the citizens to their wedding. However, Holly's plans are cut short when Koopa announces that he is going to throw them a wedding shower. 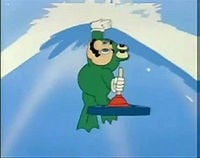 Koopa then drops a Bob-omb onto the city's protective dome, blasting a hole in it, which causes water to pour in and start flooding the city. Mario regains his courage, realizing he is the only one who can rescue his friends and the city—that, and he wants to get away from Holly. He swims up the advancing flood of water, and fixes the hole in the ceiling on his way out with a manhole cover.

The Doom Sub fires a Chain Chomp at Mario, but Mario grabs ahold of the chain and uses the Chomp to cut open the Nasty Nets that are holding his friends. Mario and Luigi then take one of the nets to capture a school of Jelectros, and hurl the net at the Doom Sub. The Jelectros electrocute the Doom Sub, forcing the Koopa Troopas to retreat.

Later on, back in Mertropolis, King Mackerel presents Mario with a medal for his heroic deeds. Holly, still infatuated with Mario, arrives and puts a wedding-day helmet on him. The helmet, however, distorts his facial appearance, and she shrieks in shock, saying that she cannot marry him because he is "the ugliest-looking frog [she's] ever seen". With that resolved, the heroes cheerfully leave before Holly has a chance to get over her fear.