As Princess Toadstool serves lunch to Mario and Luigi, which turns out to be vegetable-filled sandwiches, Mario starts complaining about eating "rabbit-food" again. Subsequently, Mario begins to wonder where Yoshi is, as he never misses lunch. Soon after, a large roar is heard. This roar sends Mario, Princess Toadstool, and Luigi scurrying out of the Dome Castle to investigate.

Outside, Mario, Luigi, and Princess Toadstool see a Rex dressed as a chef parading around a sign displaying the message "GRAND OPENING! SCOOPA KOOPA'S FAST FOOD, FREE SAMPLES". At the prospect of free food, Luigi runs up to the Rex chef and grabs an egg-burger, called an Egg Scoopa Koopa off the chef's plate, which he particularly enjoys because of the egg. However, Mario becomes disgusted due to his dislike of eggs. After Luigi gets his Egg Scoopa Koopa, Mario spots Yoshi in a line-up for food at a small concession stand, which is run by King Koopa himself.

Proceeding to order a large amount of food, Yoshi watches as his meal is assembled by several Rexes and Dino-Torches. As Yoshi's food is being made, Koopa begins to gloat about how he will make himself rich off causing the cave-people to become addicted to his food, and how he cannot wait to see the side-effects from eating too many Egg Scoopa Koopas. Getting his food, Yoshi realizes that he doesn't have any money. An annoyed Koopa (in his chef's outfit) proceeds to threaten Yoshi, until backing off by the appearance of Mario. Asking how much Yoshi owes, Mario proceeds to give him the apparently unfair sum of eighteen coins. 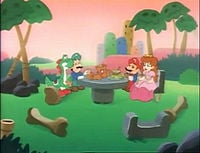 Mario, Luigi, Yoshi, and Princess Toadstool at a table.

Several days later, Princess Toadstool visits Mario, Luigi, and Yoshi, who have all gotten fat off King Koopa's food, with the latter two oddly acting somewhat like chickens. The Princess, alarmed at seeing her friends in this condition, forces the three of them to go a diet, by locking them in the Dome Castle, much to their dismay.

Moments after leaving, Princess Toadstool returns to check on her friends, but finds that while Mario is perfectly normal, since he didn't eat any Egg Scoopa Koopas, Luigi and Yoshi have been mutated by them, having grown several bird-like features, including wings, which they used to escape (although Princess Toadstool didn't believe Mario at first). Watching as his customers line up for food, Koopa begins to realize that once all his customers have mutated into Chickadactyls, he will lose his cash flow. At that point, however, Koopa realizes he can just cook the Chickadactyls and sell them to dinosaurs as "Flew the Koopa's Fried Chickendactyl Stand". After having this thought, Koopa begins to laugh maniacally, stating that he can't be too rich, or too evil. 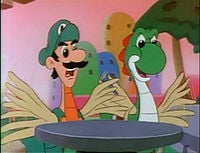 Luigi and Yoshi mutated into Chickadactyls.

Finding a Fire Flower, Mario manages to turn into Fire Mario and defeat several of Koopa's dinosaur minions, though Mario is turned back to normal after being hit by a Rex. Mario and Princess Toadstool are forced to flee to the Star Path as they are being chased by dozens of Chickadactyl-cave-people.

Transported to the ocean, Mario and the Princess manage to evade a Rip Van Fish and enter a nearby Warp Tube. Exiting the Warp Pipe, Mario and Princess Toadstool find themselves in a cave where Koopa has been dumping the garbage from his concession stand. Hitting a nearby Roulette Block, Mario gains a feather and turns into Cape Mario. Climbing-up the Warp Tube garbage-disposal, Mario enters Koopa's kitchen and begins to beat up his henchmen. Using a Dino-Torch as a flamethrower against Mario, Koopa is hit by a coconut thrown by the Princess and manages to escape by jumping down a warp pipe. After Koopa and his minions escape, Princess Toadstool drops the Chickadactyls down the pipe as well. With Koopa gone, Mario destroys the concession stand and orders everyone to return home and eat some vegetables, "Dr. Mario's orders!".

Back home, Luigi and Yoshi, returned to normal, begin eating a healthy meal of vegetables and fruit. Luigi asks Mario to pass the veggies. Mario accidentally tosses the bowl, causing it to shatter. Mario, to his amusement, states that he "just invented the tossed salad".