Not to be confused with Rhino Dinos, another name for Reznor. 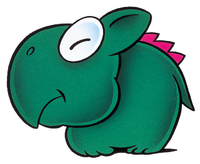 Artwork of a Dino-Rhino from Super Mario World

Dino-Rhinos reside in Chocolate Island, located in Super Mario World. They will follow Mario and jump over short obstacles to get him. When Mario jumps on one, it turns into a Dino-Torch. Dino-Torches are capable of breathing fire, unlike their bigger form, although there are unused sprites of Dino-Rhinos breathing fire. Mario can also defeat the enemy in one go by Spin Jumping on one or jumping on it with Yoshi. Yoshi can eat Dino-Torches but not the large Dino-Rhinos. Additionally, Dino-Rhinos are immune to fireballs. 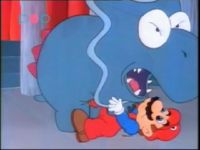 A Dino-Rhino from the Super Mario World television series

Dino-Rhinos, though never named as such, appeared only once in the Super Mario World television series. In the episode "Send in the Clown", a Dino-Rhino, along with two Dino-Torches, was shown to be held in a cage in King Koopa's "Koopaling Bros. Circus". After being shoved into this cage by Koopa, Mario narrowly avoids being eaten by the Dino-Rhino, which he defeats by shooting fireballs into the creature's mouth after transforming into Fire Mario by using a Fire Flower.

While traveling through a forest in the Nintendo Adventure Book Flown the Koopa, Mario, Luigi, Toad, and the Mushroom King encounter a herd of Dino Rhinos that, depending on how the reader solves the accompanying puzzle, will either narrowly miss the quartet or run them down, causing them to lose their International Dino-Flying Derby tickets and some Coins. In Unjust Desserts, after shedding his Toad disguise around the beginning of the story, Bowser escapes Mushroom Palace by jumping out a window and onto the back of a waiting Dino Rhino. Other Dino Rhinos are shrunk by Magikoopa, and some of them are eaten by Yoshi and can be encountered by Mario, both inside and outside the dinosaur's body.

In the final book, Brain Drain, Mario and Luigi (who is in the body of a Koopa Troopa due to Iggy Koopa's Synapse Switcher) can encounter a group of Dino Rhinos and Sumo Bros. Luigi can gain the trust of these enemies if he "scares" Mario away, but will wind up switching bodies again (if he does not have pizza to plug his ears with) when the group decides to celebrate by listening to a radio that Iggy is using to broadcast the Synapse Switcher's signal.

In Paper Mario, a pure white version of Dino Rhinos, called Albino Dinos, appear as guards in the Crystal Palace. They were initially going to be enemies Mario could fight, but they were removed. However, their battle data remains complete within the game's files.

In Paper Mario: Color Splash, Dino Rhinos appear in Mossrock Theater and The Emerald Circus and are under the control of a Shy Guy. In battle, they are shown to have a lot of HP. They attack with fire breath, like a Dino-Torch, and ramming. In the Emerald Circus, if an Animal Trainer Shy Guy is not present in the battle, Dino Rhinos get out of control and become Wild Dino Rhinos.

One Dino Rhino appears as an NPC in Paper Mario: The Origami King. It appears in the Shroom City café, singing alongside a Ptooie and a Sombrero Guy.

The in-game concept art shows that origami Dino Rhinos were originally going to be enemies.

★Dino Rhino & Dino Torch
Due to their fire-blowing points, they're thought to be closely related to the Indian Yoshi, but how deep is unknown. The history between them and Yoshi is a secret.

Dino Rhino
Tribe: Dinosaur clan
Disposition: Persistent
Game appearances: World
He's going to come after you with a big body
These dinosaurs appear only on Chocolate Island. It rushes at Mario without regard for any bumps on the road. Even when he jumps past, it turns around and persistently chases him. Even if he steps on it once, it transforms into a Dino-Torch and starts to breathe fire.
Originally, the Dino-Torch was also...
There are two types of Dino-Torches: those that become small by stepping on a Dino Rhino and those that are already Dino-Torches. They are fast-moving and strong opponents that can make big fires.

Bio: ゆっくりと移動し、段差も跳び越える。踏むとチビライタになる。[7](It moves slowly and jumps over obstacles. When you step on it, it becomes a Dino-Torch.)