Red Shy Guy, as referred to in-battle, is a character in Paper Mario: Color Splash. He is a red Shy Guy who is a passenger on the Sunset Express. He is found in the car next to the coal engine, alongside a handful of Bowser's minions and a Rescue Squad Toad. When spoken to, he initiates a meaningful discussion involving his desires and reality as Bowser's minion. Later on in the game, as Mario is exploring Mossrock Theater, he encounters this Shy Guy, although he does not re-introduce himself until after his defeat, at which point he is not seen again.

While exploring the Sunset Express, Mario boards a car filled with some of Bowser's minions. In the middle of the car, a Shy Guy and Toad #42 of the red Rescue Squad are talking. When Mario speaks to him, the Toad states they are all having problems of their own and to try speaking to each of them. After the Toad abruptly gets up and jumps out the window, the Shy Guy asks Mario to sit down and have a chat with him.

If Mario accepts, he and Huey sit down in front of the Shy Guy, who, like the other soldiers in the car, states he is sometimes tired of everyday life working for Bowser. To further this, he cites the attacks on both Toad Trainworks and the Tangerino Grill, which he states were impromptu and unreasonable. With this, he claims every obstacle Mario has faced along the way as been the result of them.

Deeper into this conversation, the Shy Guy states he often looks out the window, desiring to go off to a distant location. However, he believes and accepts that it is impossible to do so due to being a part of Bowser's army for life, requiring him to give up on his dreams. In fact, he tells Mario he will likely have to attack him one day, which he should also accept. After this discussion, the Shy Guy thanks Mario for listening to him, stating they might meet again as enemies.

This comes to fruition when Mario explores Mossrock Theater. Toward the start of the level, he encounters a Shy Guy swinging on a trapeze. Although there is nothing he is doing otherwise, he and Mario are likely to battle, during which he is joined by numerous other Shy Guys. Upon defeat, he becomes colorless. Rather than disappearing immediately, he first tells Mario he was the one who spoke to him on the Sunset Express, and is satisfied it ended this way. He proceeds to disappear and drop paint as would any other Shy Guy. As such, he is not seen for the remainder of the game and is presumably gone for good. 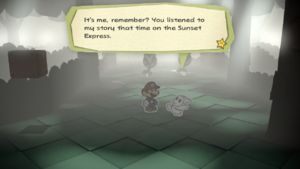 The Red Shy Guy talking to Mario after being defeated in the Mossrock Theater.