Not to be confused with Sergeant Guy.

“So, you came, did you? I’m General Guy. We’re following the orders of King Bowser by guarding a Star Spirit. As long as we keep it secure, we have permission to do what ever we want. You hear!?”
—General Guy, Paper Mario

General Guy is the leader of an army of Shy Guys and the mastermind responsible for the numerous robberies in Toad Town during the events of Chapter 4 in Paper Mario. His main base of operations is the Shy Guy's Toy Box, where he rules the local Shy Guys and is in turn very loyal to Bowser. His army obeys him without question and he lauds them for their bravery, although his overconfidence in himself is proven unwarranted once he is defeated by Mario, leaving him screaming and fleeing in panic with the rest of the Shy Guys. He has a straightforward, formal and military-esque way of speaking in general, although at one point he childishly claims that Watt's attack is "too strong" and that Mario is cheating. He wears a peaked cap and gray robes decked with shoulder patches and a gold medal with a red ribbon on it.

General Guy in his tank

King Bowser orders General Guy and his Shy Guys to guard Muskular, the fourth Star Spirit. However, General Guy and his troops are very disorganized, which allows Mario and his partners to easily infiltrate his base and defeat many of his soldiers. Later on, Mario manages to corner a large group of Shy Guys, who manage to escape by breaking through a wall. On the other side of the wall, they are reunited with General Guy. Soon after introducing himself, General Guy prepares to battle Mario for the Star Spirit.

General Guy's tank has a max HP of 30, 4 Attack points, and 2 Defense points. The light bulb on his tank is a separate target that can be destroyed, with a max HP of 8 and 1 Defense point. When combining the HP of all enemies in this fight, including the Shy Squad, Stilt Guys, Shy Stacks, General Guy's tank, and its light bulb, they have a collective 87 HP. This gives the fight against General Guy the second-highest HP total in the game, with the highest being tied between Bowser and the final form of The Master, both having 99 HP.

In the game's ending parade, General Guy and several Groove Guys dance on a float. General Guy is the only boss to appear in the nighttime part of the parade. 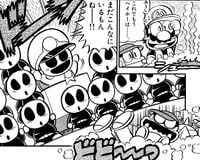 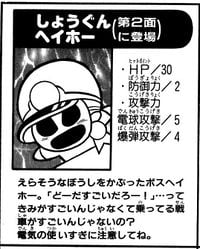 General Guy appears as a boss in volume 26 of Super Mario-Kun. Although Mario attempts to attack General Guy in a variety of ways (including cross-dressing of some sort, holding a bucket of paint and a paintbrush, and walking in something called "Ototo"), General Guy retaliates by electrocuting him. Watt, needing to be recharged, prompts Kooper to run on a treadmill. Once she is recharged, Watt zaps Mario, causing Mario to go crazy with a hammer and whack General Guy in the face.