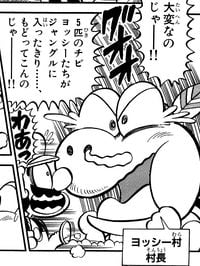 The Village Leader is the leader of the clan of Yoshis who live in Yoshi's Village on Lavalava Island. Respectable and reliable from the start, his closest friend, an unnamed Brown Yoshi, claims that his future as a leader was evident from their adventures as children. During these adventures, the Chief Yoshi frequently committed acts of mischief. The events include his attempts at climbing trees, throwing rocks around and bothering the local Ravens. It can be inferred that he grew more mature as he aged. Eventually, he was selected to be the new leader of Yoshi's Village and has since performed his duty infallibly. He and Raphael the Raven may be acquaintances, although the Village Leader states that the two only saw each other once, long ago.

During the events of Paper Mario, Mario visits Yoshi's Village searching for one of the Star Spirits. During this time, Chief Yoshi is flabbergasted when he discovers that the children of the island have run away into the jungle. Upon Mario's return along with the five kids, the leader gives Mario the Jade Raven, the key to finding Raphael the Raven.

The Village Leader is a standard Green Yoshi. Unlike the other Yoshis in his clan, he can be easily identified by his overweight frame, feather, and arm bands. Additionally, he looks more tired and laid back than the others.

The Village Leader in Super Mario-Kun appears to be less calm; the first thing he does to Mario is to yell at him.

However, he is called ヨッシー村の 村長 in the actual game, with no reading for the kanji specified. It is unclear whether this is a proper name or a description.
Retrieved from "https://www.mariowiki.com/index.php?title=Village_Leader&oldid=3756244"
Categories: