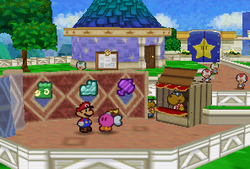 Rowf and Rhuff are a Doogan father and son who run Toad Town's only badge shop in Paper Mario. They constantly supply Badges for Mario's shopping needs, though at one point Mario must retrieve Rowf's Calculator from the Shy Guy's Toy Box. Their shop opens after the end of Chapter One.

A Toad from the docks in Toad Town mentions that Rowf and Rhuff had set up a shop in a different town a long time ago while selling rare foods before moving to Toad Town to sell badges. The Toad also mentions that Rowf's wife used to work with him a long time ago in the business but ended up with no profit. The Toad muses what happened in that time.

At the end of the game, they leave to sell at another place.

Mario eventually gets a letter from the pair stating that Mario is a great customer and that he should come back to their store, and also that their badge prices are 0% off.

If Mario buys all the badges they have by the end of Chapter 5 and visits them again, Rowf will tell Mario he'd bought him dry and will thank him for being such a frequent customer. At the end of the game, if Mario stops by the closed badge shop on the way to Peach's Castle, Rowf says he plans on taking his profits (a total of 1,650 coins if Mario purchased every badge) and moving on to another town. He claims he's only staying for the moment because Rhuff is excited about the festivities going on.

In addition, Rowf awards Mario with the I Spy badge for returning his Calculator.


Thanks a bunch for shopping at my place. You're a cool customer!
To show you my gratitude, I'll be waiting for you with all my stock 0% off!