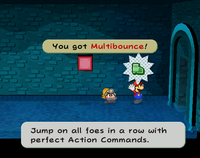 Multibounce is a badge in Paper Mario and Paper Mario: The Thousand-Year Door. In Paper Mario, it can be bought from Rowf's Badge Shop after chapter one for seventy-five coins. In Paper Mario: The Thousand-Year Door, it can be found at Shhwonk Fortress, inside a red ? Block in the Fortress' sewers, obtained at Pianta Parlor after getting the Silver Card for fifty pianta tokens, or dropped by Paragoombas, Paragloombas, Dark Paratroopas, Parabuzzies, Spiky Parabuzzies, Swoopulas, and Swampires. If equipped by Mario, it lets him perform a Multibounce move that costs two FP; it is a jump attack that hits all enemies one after the other, starting from the one at the front, if the Action Command is executed correctly. Messing up the Action Command stops the attack at whichever enemy Mario had reached. Each additional copy of the badge increases the damage it does to enemies by one while also doubling the FP it costs. It functions similarly to the Line Jump attack in Paper Mario: Sticker Star and Paper Mario: Color Splash.

A sticker with a similar appearance to Multibounce is seen in pre-release footage of Paper Mario: Sticker Star shown at E3 2010; this sticker does not appear in the final game.