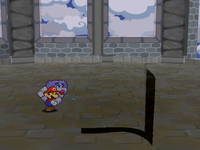 Flurrie revealing the hiding spot of the Attack FX B badge

Attack FX B is a badge in Paper Mario: The Thousand-Year Door. It can be found in Hooktail Castle by using Flurrie in the middle of the area where Hooktail was fought to reveal a chest. It can only be found after accepting Ms. Mowz's "Elusive Badge!" trouble. When it is first obtained, it is treated as an Important Thing and cannot be equipped. After Mario delivers this badge to Ms. Mowz, she gives it back to Mario, and only then can it be equipped. Ms. Mowz then reveals that she had hidden the badge herself to see if Mario can find a badge she had hidden so well and joins Mario's party.

If Mario is equipped with the badge, it makes a mouse's squeak whenever he uses his hammer outside of battle and whenever he jumps or hammers an enemy during battle. The sound effect is superficial. If multiple Attack FX badges are equipped, the sound effects play one at a time.

Obtained the Attack FX B badge.