A Zess Dynamite is a food item found in Paper Mario: The Thousand-Year Door. It appears to be a berry cake in a baking-tin with dynamite sticks stuck into it. The player can either find out about this recipe via coincidence, or they can learn about it from Wonky at Herb T.'s place down below Rogueport for a few coins. 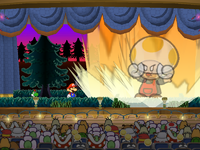 Zess Dynamite when it is used in battle

To make a portion of Zess Dynamite, the player needs a Mystic Egg from Boggly Woods, a Coconut from Keelhaul Key and two Fire Flowers from one of the shops. Bringing those items to Zess T. the Toad chef will result in an Egg Bomb and a Coconut Bomb. These two items can be combined further into Zess Dynamite.

Zess Dynamite is an attack item, and can only be used in battle. When thrown at enemies, it summons a ghostly image of a fierce-looking Zess T. to the battlefield, which then causes a massive explosion. The explosion affects all enemies and deals 7 points of damage to them, making Zess Dynamite one of the most powerful attack items in the game. Due to being explosive-typed damage, any weaknesses apply, such as Bulky Bob-ombs (and Bob-ulks) exploding and the Lava Bubble family taking +1 damage.