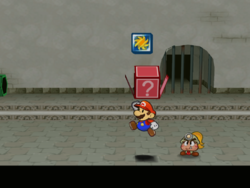 Pretty Lucky is a badge in Paper Mario and Paper Mario: The Thousand-Year Door. It is a weaker version of the Lucky Day badge. In Paper Mario, it can be bought from Merlow for five Star Pieces. In Paper Mario: The Thousand-Year Door, it can be bought from Dazzle for three Star Pieces, found in a red hidden ? block near the Puni hole in Rogueport Sewers, and can be rarely dropped after a battle by Bandits, Badge Bandits, Spinias, Spanias, and Spunias. If Mario equips the badge, all attacks from his enemies have a 10% chance of missing entirely, though this chance is not as great as the one given by Lucky Day (which has a 25% evade rate). The chance of attacks missing is increased when multiples copies of the badge are equipped, as well as when other badges that reduce the chance of being hit are equipped, such as Lucky Day and Close Call.