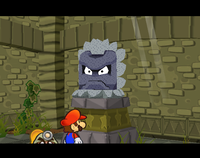 The thwomp that hosts the quiz show.

Shhwonk Fortress is an underground fortress in Paper Mario: The Thousand-Year Door where the Moon Stone and the Sun Stone are kept. It is beyond Petalburg and a few smaller stone fortresses. The Stone Keys found inside are used to open the pipe to Hooktail Castle.

Long ago, Shhwonk Fortress was a place of relief from monster invasions for Petalburg residents, but more recently it has been invaded by monsters and traversing to the ruins was recently outlawed without permission from Mayor Kroop. It is unknown when the fortress was built, but at least one of the fortresses located in the path to it is estimated by Goombella to be about a thousand years old.

Before Mario is allowed entry, he must participate in the 65th Super Fun Quirk Quiz hosted by a Thwomp guarding an entrance pipe. After passing the quiz or defeating four Clefts (if Mario fails the quiz), Mario is granted access into the fortress, which is infested with Fuzzies. After collecting the Sun Stone and the Moon Stone, Mario must fight a Gold Fuzzy and its Fuzzy Horde in order to exit the fortress.

Mario and Goombella make their way into the entrance with a Save Block. They walk up to a stony Thwomp on a pedestal and it wakes up, surprised that Mario and Goombella are the first visitors to come to the fortress and find the stone keys. However, the Thwomp does not let them pass unless they compete against it in the 65th Super Fun Quirk Quiz. After the quiz, the Thwomp reveals the Warp Pipe and the pair can proceed.

Mario and Goombella arrive in the sewers via the Warp Pipe where the ground is flooded with water. The player can spot a red ? Block that contains the Multibounce badge. The duo can either go left or right to collect the two stone keys. Both corridors have two Fuzzies along the way to the keys. When they reach the end rooms to collect the Sun and Moon Stones, Fuzzies appear and battle them.

After collecting the stone keys, the duo come back to the entrance to find a Gold Fuzzy, which becomes angry at Mario and Goombella for trespassing its place. An optional boss battle commences and the Gold Fuzzy summons out a horde of Fuzzies to outnumber them. After defeating the leader and the horde, they can exit out of the fortress.