“We X-Nauts aren't all rainbows and lollipops. I could assure you, we could be quite nasty.”
—Sir Grodus, Paper Mario: The Thousand-Year Door

The X-Nauts is an evil organization led by Sir Grodus in Paper Mario: The Thousand-Year Door. The majority of the operatives are also called X-Nauts, though there are other classes of soldiers and creatures in Grodus' employ. Their base of operations is the X-Naut Fortress, which is located on the moon. 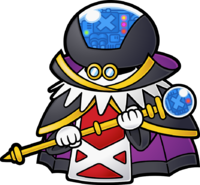 All that is known about the X-Nauts stems from their failed plan to conquer the world using a 1,000-year-old demon known as the Shadow Queen. Grodus somehow came in contact with a trio of sisters known collectively as the Shadow Sirens, who told him that the Shadow Queen could only be released from her prison if the seven Crystal Stars were collected, and a vessel provided for her disembodied soul to possess. The X-Nauts kidnapped Princess Peach to use as the vessel, and Mario was manipulated into gathering the Crystal Stars in an attempt to save her from her captors.

However, Grodus had been misled by the Shadow Sirens, and when he tried to command the resurrected Shadow Queen to do his bidding, she destroyed his body. Grodus' robotic head, his second-in-command, Lord Crump, and two regular X-Naut soldiers and two Elite X-Nauts were last seen in Poshley Heights, as TEC-XX destroyed their fortress earlier, and reportedly reformed for the better.

While one would expect the organization's name to be pronounced "ecks-naughts", there is a reasonable amount of evidence that "cross-naughts" is more correct. In addition to the French and German translations both containing a derivative of the word "cross", the X-Yux is confirmed via Tattle as being pronounced "cross-yux". The name "cross-naughts" would also reference the game Naughts and Crosses (i.e. tic-tac-toe). However, Goombella's Tattle for each X-Naut enemy uses "an" instead of "a" before the enemy's name, thus implying that the "ecks-naughts" pronunciation is an alternate way of saying it.