This article is about the party member from Paper Mario: The Thousand-Year Door. For the infant Yoshis also referred to as "Mini-Yoshis" or "Mini Yoshis", see Baby Yoshi.
Not to be confused with Mini Yoshi.

“Let's rock, Gonzales! I'm ready to chew this dude up and spit him out!”
—Yoshi, Paper Mario: The Thousand-Year Door

Mini-Yoshi (known originally as Yoshi and sometimes called Yoshi Kid)[citation needed] is Mario's fourth party member in Paper Mario: The Thousand-Year Door. He is a spunky Yoshi baby and the youngest of Mario's party members (being newborn). His purpose in the overworld is to allow Mario to ride him and move him around much faster and use a Flutter Jump-like ability to cross gaps.

Yoshi hatching out of his egg.

While Mario, Goombella, Koops and Flurrie are fighting in Glitzville's Glitz Pit, they find that one of the fighting teams, the Armored Harriers, appears to be impervious to any attack they use. At an earlier time, Mario had found a Yoshi's Egg bouncing around, being chased by the owner of the Hot Dog Stand, Mr. Hoggle (who had hopes of making a Southern Fried Egg Dog of Tastiness with it). Mario eventually caught it, and Mr. Hoggle allowed him to keep it as most people "don't like eating stuff that jumps all over the place". After Mario returns from his problematic battle with the Armored Harriers, the egg hatches into a newborn Yoshi baby who thanks Mario for saving his life. He then joins Mario (who he knows as Gonzales), who proceeds to name him. The Yoshi can defeat the Armored Harriers by eating them and spitting them at each other, as the gulp attack ignores enemy defense. He travels with Mario for the rest of the game.

At the end of the adventure, he goes solo at the Glitz Pit, going under the name "The Great Gonzales Jr.", and is stated to be getting close to the title match. In Goombella's letter, the Yoshi challenges the "Great Gonzales" by saying "I could totally take you in the ring now, so bring it!" He is notable for calling Mario "Gonzales" throughout the entire course of Paper Mario: The Thousand-Year Door (in a manner similar to other non-player characters such as Goldbob and his family); his odd familiarity with this name is due to Mario's pseudonym, "Great Gonzales" (upon Grubba and Jolene's insistence) while fighting in the Glitz Pit. By the end of the game, though, the Yoshi would appear to have slowly realized that "Gonzales's" real name was Mario, but he states that Mario will always be Gonzales to him.

Goombella can use Tattle on the Yoshi Egg only after Mario glides down to the roof of the Hot Dog Stand where the egg sits but before Mario interacts with the egg.

“Gosh, what a colorful egg! Must be a good one, huh? I mean, look at it jump! But jeepers creepers, I sure wouldn't want to try to eat it... I mean, EWWWWWW! I don't eat moving things. Let's hurry up, grab it, and give it back to Mr. Hoggle.”
—Goombella, Paper Mario: The Thousand-Year Door

In Super Paper Mario, Yoshi appears as a Catch Card won by winning the Duel of 100 in the Sammer's Kingdom. Francis has a collection of seven Yoshi dolls, each one a different color. Lastly, Yoshi, along with all the other partners from the previous Paper Mario titles appear in a photograph at the Mario Bros.' House during the introduction.

In Super Smash Bros. Brawl, Mini-Yoshi appears as a Sticker.

In Super Smash Bros. for Wii U, Mini-Yoshi reappears as a trophy. This is the first game where he is referred to with this name.

Yoshi's coloration is determined by the amount of time that passes between the point where his egg joins Mario's party atop the Hot Dog Stand to when Mario eventually meets the newborn after fleeing from or losing to the Armored Harriers. Initially, Yoshi is green, has a red mohawk, and wears orange pants with white polka dots (giving it a Yoshi's Egg-like pattern) and a pair of his species' signature boots. While in his egg, however, Yoshi's color scheme changes every few minutes, as shown in the chart below. If more than twenty minutes elapse before Yoshi hatches, the cycle restarts. Each coloration is for aesthetic purposes only, and will stay the same for the rest of the game upon Yoshi's hatching.

This newborn Yoshi baby may be small, but he's got quite an attitude. Press

to hop on his back and move more quickly. Press

when riding to float through the air.

You'll name the newborn Yoshi yourself when he hatches in Chapter 3, but for the sake of clarity, we'll refer to him by the name of his species. Press X to hop on the little guy's back and he'll move more quickly. While you're riding him, you can press the A Button to float through the air for a brief time.[1]

Note that the player can, as in the English version, name this character anything under a certain space limitation. These names are the default if the field is left blank. 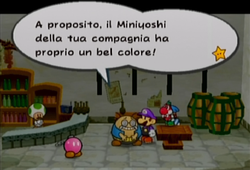 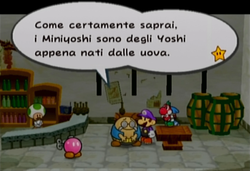 Wonky's tale about Miniyoshis in the Italian version of Paper Mario: The Thousand-Year Door