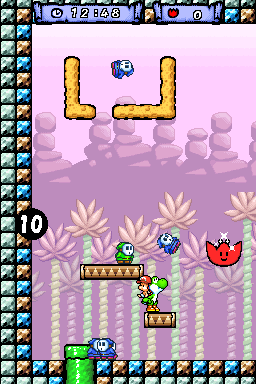 Tulip Shooter is an unlockable minigame in Yoshi's Island DS. The player controls a Yoshi in a room full of Shy Guys and one or more tulips in the air. The aim is to spit as many Shy Guys as possible into the tulip within the time limit. A Hard mode can be unlocked by collecting all eight character coins in the first world.

Players are given 30 seconds to spit Shy Guys into the single large tulip hanging in midair. Regular Shy Guys and Jumping Shy Guys wander around.

Instead of one big tulip, there are now three small tulips, as well as wider and more dangerous numbers of enemies. Players are given 60 seconds to complete the whole challenge. Not all of the enemies can be eaten and spat into the tulips.