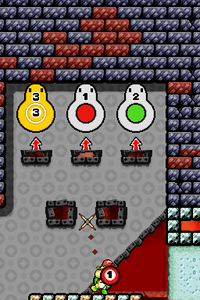 “This ball has a number in it. Try throwing it in the slot of the same number. If you get them all, well, something good is bound to happen!”
—Message Block, Yoshi's Island DS

Number Balls are a type of ball that can be found only in Yoshi's Island DS. They look very similar to billiard balls and have a one-digit number on each. These uncommon objects appear in levels such as Number Ball Special, Six-Face Sal's Fort, and Find the Number Ball!

Like with eggs, the player can pick up Number Balls just by touching them, although they are usually hidden throughout the levels. When they are collected, they can be thrown just like eggs to land in a certain slot. Once all of the Numbers Balls are in their correct slots, they can activate something, such as a door, to allow the player to progress. If the player is to throw the balls away from them, missing a slot, the balls eventually disappear and appear back in their respective locations.