From the Super Mario Wiki, the Mario encyclopedia
(Redirected from Chomp Shark)
Jump to navigationJump to search

A Big Chain Chomp (referred to in the Yoshi's Island series as a Chomp Shark or Shark Chomp[1][2]) is an especially large variety of Chain Chomp. Large Chain Chomps appear in many other games, such as Super Mario 64, Super Mario Sunshine, and the Mario Kart games; however, the ones in those games are treated as the normal-sized Chain Chomps.

Shark Chomps (also named Bow Wow[3] or Giant Chomp-Chomp[4]) are introduced as one of the three varieties of "Chomps" in Super Mario World 2: Yoshi's Island, where they appear in Marching Milde's Fort and KEEP MOVING!!!! In the former level, the Shark Chomp appears right after a group of Incoming Chomps. These giant Chomps relentlessly chase after Yoshi, gnashing through anything in their way. Their appearances in certain levels make backtracking impossible, as they are almost invulnerable and will often eat anything on which Yoshi can land. Eventually, the Shark Chomp chases Yoshi to a platform it cannot eat and breaks its teeth, causing it to tear up in pain and fall off the screen.

In Yoshi's Island DS, Shark Chomps act exactly as they do in Super Mario World 2: Yoshi's Island and even use the same sprite, though due to the lighter colors it seems to have been based off the Yoshi's Island: Super Mario Advance 3 sprite instead. One appears in Rompin', Stompin' Chomps.

In Yoshi's New Island, a Chomp Shark is the main feature of Chomp Shark Chase. Their teeth no longer crack, although, they still tear in pain. 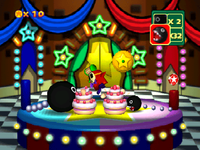 In the Mario Party 3 minigame Game Guy's Sweet Surprise, a large Chain Chomp known as Big Chomp appears alongside a smaller Chain Chomp named Little Chomp. The two Chomps race to eat a cake, and the player must guess which one will win. If the player correctly predicts that Big Chomp will win, their coins are doubled. Little Chomp's coin multiplier varies; the higher it is, the higher Big Chomp's chance is of winning.

In Super Princess Peach, Big Chain Chomps are found in Wavy Beach and Giddy Sky, specifically Wavy Beach 5-2, Wavy Beach 5-4, Giddy Sky 7-2 and Giddy Sky 7-8. They are usually found bouncing down hills provided with gaps in which the princess and her umbrella may hide. Some of them are also seen periodically falling down pits. They can defeat other enemies, such as Nipper Plants, on contact. One is also seen in the background of the Wavy Beach world select screen, bouncing on the water surface, resembling Incoming Chomps' background sprites. According to the game's Glossary, Big Chain Chomp is "A giant Chain Chomp. Very dangerous!"

A Big Chain Chomp appears in New Super Mario Bros. Wii during Iggy's battle in the castle of World 5, having been transformed from a regular Chain Chomp via Magikoopa's spell. This Big Chain Chomp pulls a rail-based carriage Iggy rides in, as it hops around the platforms of the room. When Iggy is stomped, the Big Chain Chomp gets red and angry with the sound of a train whistle, akin to Wiggler, before beginning to temporarily move faster. This seems to stand in for having Iggy retreat into his shell. Once Iggy has been stomped three times, the Big Chain Chomp is defeated along with its master.

A Big Chain Chomp, possibly the same one from before, also appears in New Super Mario Bros. 2 during Iggy's battle in World 2-

. It acts much the same as the one from the previous game, but is somewhat smaller, and has more paths to take due to the different room layout. It is defeated the same way as previously.

Big Chain Chomps reappear in Super Mario Odyssey alongside their smaller counterparts in the Cascade Kingdom. Like regular Chain Chomps, they are used to break open larger rocks and even mountainsides Mario usually wouldn't be able to reach. Madame Broode also has a golden Big Chain Chomp as a pet that she calls "Chain Chompikins".

In Paper Mario: Sticker Star, Big Chain Chomps are more common than their regular variant (of which only one appears in the final battle with Bowser) and appear in World 5: one in Chomp Ruins and three in Rumble Volcano. They cannot actually be harmed (outside of jumping on them pre-battle when they are asleep, which is mitigated by the fact that they, like all enemies and even Mario, recover health when asleep); instead, they are actually the basis of a puzzle. The player has to hammer their post down while they are asleep, then engage them in battle and use any attacks before they wake up. They can be put to sleep with a Thing sticker or a Baahammer. Afterwards, the Big Chain Chomp will then lunge at the player, dealing 10 damage and ending the battle early due to escaping confinement. This attack cannot be blocked. After the battle in Chomp Ruins, the Big Chain Chomp knocks down the back wall, revealing the Comet Piece, then jumps into the background (similar to the Chain Chomp in Super Mario 64, where it bounces around, destroys the jail cage containing the Power Star, then bounces off to the summit). In Rumble Volcano, the Big Chain Chomps are needed in order to reach Petey Piranha, the guardian of the fifth Royal Sticker.

Iggy Koopa, Mario, and Luigi run away from the Big Chain Chomp