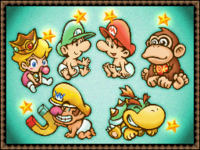 Six of the star children

The star children (singular: star child) are seven babies that possess, as Kamek puts it in Yoshi's Island DS, "an extraordinary amount of power." In the game, Bowser travels back in time to steal the stars from these children to take over the universe – the true intentions behind the kidnappings of all the children. However, few of the children captured by the Toadies turned out to be star children.[1] 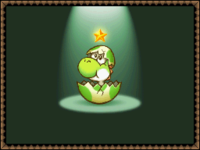 Baby Mario, Baby Luigi, Baby Peach, Baby Donkey Kong, Baby Wario, and Baby Bowser were all captured, but Baby Mario and Baby Peach were rescued by the Stork from the initial kidnapping, Baby Luigi hid at the time Bowser was checking the babies for stars, Baby Wario was dumped in a cave by a Toady after he threw an enormous temper tantrum, and Baby Bowser enraged Bowser into kicking him out of the castle. Baby Donkey Kong is not seen escaping, but he is seen later in Baby DK, the Jungle King!, prior to the rescue of Baby Luigi.

After Bowser, Baby Bowser and Kamek are defeated, a newly hatched baby Yoshi is revealed as the seventh and final star child during the credits.