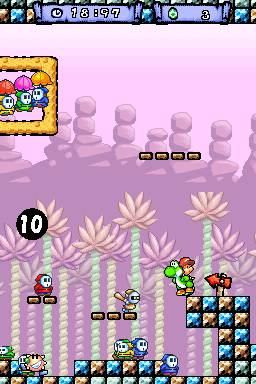 Speed-Eater is an unlockable minigame in Yoshi's Island DS. The player controls a Yoshi in a long room full of enemies and must try to make as many eggs as they can by eating enemies. A Hard Mode can be unlocked by collecting all eight character coins in World 4.

Players have thirty seconds to eat and make eggs out of Shy Guys and a few harder enemies.

This mode has many more difficult enemies, some of which can't be eaten, however the player is given sixty seconds to beat this challenge.