This article is about the mini-game from Yoshi's Island DS. For Yoshi's ability to throw eggs, see Egg Throw. 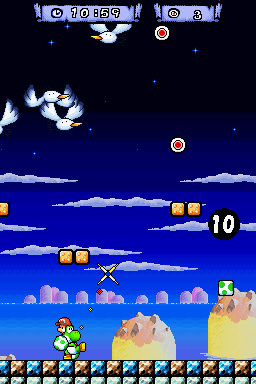 “Timing is vital,
aim must be true,
measure the angle and win, do!”
—Message Block, Super Mario World 2: Yoshi's Island

Egg Toss is an unlockable minigame in Yoshi's Island DS, where the player controls a Yoshi and must shoot eggs at targets floating above them. Many Egg Blocks nearby supply eggs. A Hard Mode of Egg Toss can be unlocked by collecting all seven character coins in World 5. Egg Toss made a return as the 2-player minigame in Yoshi's New Island under the name of Eggy Pop.

Players have 30 seconds to hit seven targets. A few Goonies above try to interfere.

Although players are given 60 seconds instead of 30 to beat this mode, there are many Piranha Plants, more Goonies, and even an undefeat-able Tap-Tap to hinder Yoshi's progress, as well as an extra two targets.