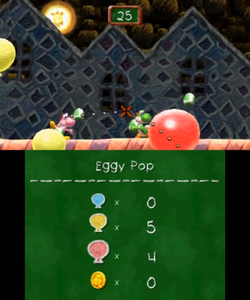 Eggy Pop is a two-player minigame in Yoshi's New Island. It is a remake of Egg Toss from Yoshi's Island DS. The objective of the minigame is to pop as many balloons as possible within one minute. A Yoshi starts the minigame in a castle-like area with an Egg Plant nearby. Balloons also appear at various intervals, and the player who gets the most points at the end is the winner. The minigame's title is a pun on American rock musician Iggy Pop; this is actually the second reference to Pop in the Mario series, the first being Iggy Koopa.

The points are given as follows: