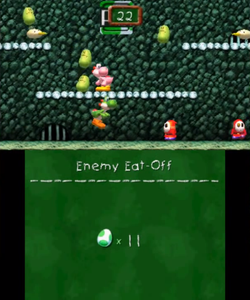 Enemy Eat-Off is a two-player minigame in Yoshi's New Island. The objective of the minigame is to eat and turn as many enemies into eggs as possible in one minute. A Yoshi starts the minigame in a castle-like area with four pipes nearby. Random enemies also appear at various intervals, and the player who gets the most points at the end is the winner, with each egg being worth ten points. A POW Block also randomly appears once in a while and destroys all enemies on-screen when struck.