Propeller Piranha, originally known as Hootie the Blue Fish,[1] is a purple species of Piranha Plant that appears in Super Mario World 2: Yoshi's Island and Yoshi's New Island. They bear a strong resemblance to Jumping Piranha Plants and Piranha Pests; they attack in a manner similar to the latter, but unlike other Piranha Plants in the games, the Propeller Piranhas are a near-invincible enemy for Yoshi. They were originally named after the band "Hootie & the Blowfish". 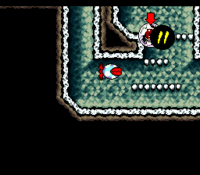 In Super Mario World 2: Yoshi's Island, the Hooties' only appearance is in Naval Piranha's Castle, though they are numerous in this level. They hover through the air and patrol a set path, often in pairs, and typically follow along the edges of platforms, akin to a Spark or Spike Top. Avoiding a Hootie can be difficult as their paths will often take them through small tunnels forcing Yoshi to wait for the creature to pass by. They cannot be destroyed by any normal means or defeated by swallowing them with Yoshi's tongue, but throwing an egg will stun them by rotating for 2 seconds.

A blue watermelon or red watermelon or possibly Superstar Mario can defeat these Hooties, but they just keep respawning. A POW Block can defeat them permanently. If a Yoshi makes contact with a Hootie, it will inhale Yoshi and chew on him for a short time similar to that of Wild Piranhas before spitting him out. While they chew, they repeatedly flash to a light blue color with red lips.

Early concepts show that it was seemingly initially intended to have the same color as a normal Wild Piranha, hinting a connection to the Jumping Piranha Plant.[2]

Two Hooties appear in Spray Day Mayday in Yoshi's New Island, looking and acting much like the ones in the previous game. They have tongues and larger mouths in this game.