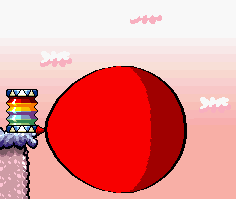 A red balloon[1][2] is an item found in Super Mario World 2: Yoshi's Island and its reissue. It starts off as a small balloon, and a Yoshi must stand on a platform that pumps it up with air. It can be filled only a certain amount, then the platform compresses on itself. After the Yoshi inflates the balloon fully, he can ride it through the sky until it runs out of air and falls off the screen. Once the Yoshi lands on it, air immediately starts leaking out the end, gradually deflating the balloon. It can be ridden at any size, but jumping on it before it is fully filled could possibly jeopardize chances of a 100% score.

Red balloons appear in the stages Don't Look Back! and Ride Like The Wind. The balloons cannot be popped and can be used only once.