Red Girders[1][2], or simply Girders[3], are usable objects that first appear in Mario vs. Donkey Kong: Mini-Land Mayhem!. They are used to connect two Red Girder Rivets[4] and form platforms or walls. They are not to be confused with generic red girders that appear in other games, as these form a different gameplay element.

Red Girders are a staple in the recent Mario vs. Donkey Kong games. Due to their simple nature and use, they are introduced early in each game they appear in, specifically the first level. 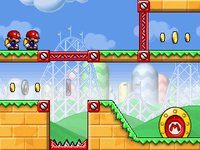 In Mario vs. Donkey Kong: Mini-Land Mayhem!, Red Girders are usually used as platforms to keep the Mini characters from falling into traps such as Spikes and can be drawn vertically, horizontally, and diagonally from one Red Girder Rivet to another. They are a resource, meaning that the player needs to have a certain number of Red Girder pieces to be able to build one platform between two rivets. In order to remove and gather pieces, the player has to tap the rivet that is adjacent to one or more Red Girders. When traced vertically, they function as walls that the Minis cannot cross from any side, but positioning a Red Girder diagonally or horizontally renders it semisolid, allowing characters to cross it from beneath. Objects called Girder Pickups also appear, which give the player more Red Girders to use in a level. They require Minis to collect them as they walk. A large variation of Girder Pickups which add five to the player's Red Girder count appear as well. Red Girders and the Pickups are also available for use in level editors. A total of 35 Red Girders and 10 Pickups can be placed in one level.

Red Girders and their Pickups also appear in Mario vs. Donkey Kong: Tipping Stars, behaving and being used in the same way. Although only common Red Girders are seen during the course of the single-player campaign, the game's Workshop Store introduces design variations that can be unlocked for use in the level editor. These changes are only aesthetic, as they are essentially the same as Red Girders. The variations are White Girders, Pink Girders, Green Girders, and Gold Girders, accompanied by their respective rivets: White Rivets, Pink Rivets, Green Rivets, and Gold Rivets. Only one girder type can be used when building a level.