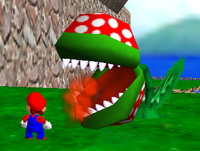 A Piranha Flower in Super Mario 64

In Super Mario 64 and its remake, Super Mario 64 DS, Big Fire Piranhas are known as Piranha Flowers[3][4] and are the target of the first mission of Tiny-Huge Island: Pluck the Piranha Flower. Five of them appear in this mission as a group boss. Like Small Piranhas, they blend in the grass at first. When Mario approaches, they grow in size at an alarming rate, spit a fireball, then quickly shrink back to their invulnerable selves. All of them appear in one area, and they must be attacked to obtain a Power Star. In Super Mario 64 DS, another way to deal with them is by using a mushroom hidden in one of the three wooden stumps in the same area, as a giant character will instantly defeat the enemies upon touch. Once defeated, they shrink like a normal-sized Piranha Plant before leaving the player with two coins (or, if defeated with a mushroom, three coins).

In New Super Mario Bros. Wii, only two Piranha Flowers are found, in World 2-3. From this game forward, they can be defeated by shooting three fireballs at them or by using a Star.

Big Fire Piranhas return in Super Mario Maker 2, acting as they did before. In the Super Mario 3D World style, they have the same appearance as their smaller counterparts.

Big Fire Piranhas also appear in Mario & Luigi: Bowser's Inside Story and its remake, where they were raised by Fawful and temporarily prevent Bowser from passing in Peach's Castle. Mario and Luigi must go to the Chest Station within Bowser's body and spring Bowser into the Big Fire Piranhas several times to defeat them. Getting hit by fireballs or any Piranha Plants and Chain Chomps along the way will cause Bowser to lose 10 coins.

While Big Fire Piranhas do not appear in Super Smash Bros. Ultimate, they are mentioned briefly by Viridi during Palutena's Guidance dialogue for Piranha Plant. Unlike most other variations generally mentioned in order of appearance, they are listed amongst New Super Mario Bros. Wii debuts. Big Piranhas, Nipper Spores, Small Piranhas, and Fire Stalking Piranhas are similarly listed out of order.