“Could you try? Do you... know zee massage arts?”
—Broque Madame, Mario & Luigi: Bowser's Inside Story 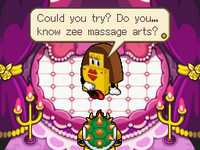 Bowser comes across Broque Madame's house in Blubble Lake, and when he enters she asks for a massage to soothe her aching back. This is accomplished by Bowser using his Brawl Attacks on her, Shy Guy Squad and Broggy Bonker excluded. Bowser must keep his Brawl Attacks going for as long as possible without failing. If Bowser does well enough, Broque Madame rewards him with coins and equipment. Bowser's score is saved if he gets the high score. However, Broque Madame only saves the score for the minigame, so Bowser must still save at a Save Block for the game to be saved, as Broque Madame warns him.

If Mario and Luigi visit Broque Madame, she immediately regards them to be weak but politely asks them to return to talk with her again as she is lonely, and to also request a "burly" guy (Bowser) to come to her house for a massage. If they do return to talk with her, she tells them stories. These stories include topics such as the Shroob Invasion and the fact that someone (Bowser) kept some of them, a reference to the cold storage in Bowser's Castle. She also says that if they have a special one that they need to care for them, because she once had her own special person that gave her up for blocks. She also mentions Kuzzle, who used to come to the lake, but now no longer does so ever since Bowser took his Star Cure.

Broque Madame also appears in Mario & Luigi: Bowser's Inside Story + Bowser Jr.'s Journey, where she makes an appearance in the Bowser Jr.'s Journey mode as a boss. She is a flying enemy and her Special Skill is Smack Back Attack. She is battled in Broque Madame's Handiwork after Bowser Jr. and Kamek go to her to make the Skeletone Formula:D, as she asks them to give her a massage. She is weak against Ice Bros., as she is soothed by the ice that they throw. Like an enemy infected with Malatone Formula:X, her special skill, Smack Back Attack, cannot be denied; only Stop and Drop can stop it. After the battle, she creates 200 servings of Skeletone Formula:D. She is battled a second time during Broque Madame's Secret; this time, she must be defeated before four allies get defeated. She is battled once more in A Mighty Melee during the second and third rounds. The second round works the same as in Broque Madame's Secret, except there are several Bandits and Bob-ombs as troops. In the third round, she is the First officer and fights alongside King Bob-omb, and this time her special skills can be denied.

Broque Madame talking to the brothers.

Broque Madame reappears in Mario & Luigi: Dream Team. She is found in the back room of the shop in Driftwood Shore, where Princess Peach (later revealed to be Kamek in disguise) and Toadsworth, both disguised as Brocks are jumping on her back to massage her. She holds the endless mode for the Luiginary Attacks in this game. She also runs a shop in Dreamy Driftwood Shore, and she helps the Bros on finding the Driftwood Jellyfish Sheets during their search for the Ultibed parts by giving them the Old Lithograph as a clue she happened to stumble upon.

Upon Mario and Luigi's first visit to Driftwood Shore, they meet Broque Madame on a stand, who suggests the idea of the Bros. entering her dreams due to her boredom at her shop and her crave for excitement. This is much like the Mad Skillathon; however, it is the Luiginary Attack version for it, similar to her being the version of the Cholesteroad for Bowser's Brawl Attacks in the previous game.

These are the list of rewards gained from hitting the B, A or S rank scores, them respectively being 200 for B, rewarded by 100 coins, 500 for A, rewarded by 300 coins, and 800 for S, rewarded by an exclusive piece of gear. If 999 points is reached, the minigame will automatically stop. After getting S rank in all four challenges, the player is awarded with the Excellent Boots.