This article is about the Pi'illo Island location. For the boss fought by Giant Luigi in the Dream World, see Mount Pajamaja (boss).

Mount Pajamaja is a half snowy, half fiery mountain in Mario & Luigi: Dream Team that Mario and Luigi traverse up with the tour guides, Big Massif and Lil' Massif, in order to make it to the top, where Antasma and Bowser are with the Dream Stone to stop their plans. Its name is a pun on "pajamas."

Mount Pajamaja is rocky towards the bottom, with some volcanic areas on the inside. Various gimmicks can be found, such as the Gonzola. Mario and Luigi have to free two Mega Pi'illos in order to move on to the next area, but to do so, they must follow Big Massif and Lil' Massif around the mountain. They learn the Spin Jump technique along the way, the move required to access and free the first Mega Pi'illo, Phil.

After traversing up the western side of the mountain, Mario rescues Lowe, the second Mega Pi'illo. The two Pi'illos open up an impassable gate which leads the way to the top of the mountain. To get to the peak, the Bros. must learn the Side Drill technique. After arriving at the bottom of the snow-capped area, the Bros. can drink from a fountain. This will cause a strange dream leading up to a fake Game Over screen. This makes Prince Dreambert yell "MARIO! LUIGI! WAKE UP! NOW!", waking the brothers up. The water from the fountain completely restores all of their HP and BP. They will encounter another pair of petrified Mega Pi'illos that Luigi will have to rest on for Mario to save them. The two Pi'illos will open up another gate leading to the area where Mario and Luigi will have to fight Mammoshka.

Throughout Mount Pajamaja, various statues depict apparent famed heroes doing the one thing each of them were known for. By each statue, a stone slab rests, with information about them on it.

Amid the sweaty furore of the Bodybuilding Siege, Benchor alone kept both his wits and his reps. Prone on the battlefield, he pressed all who tried to cross the field into the vault of the sky. Like an angry gym deity, he kept his core taut as he lifted foes skyward...earthward...skyward. Here he lies for eternity, the earth a damp bench from which he will never again rise.

Biceptus almost single-handedly suppressed the Great Protein Rebellion of the Vegebrodies. His turgid biceps were said to be infused with a divine power no amount of lifting could match. When he swung his fist earthward, the very ground would tremble for miles at his might. Let the legends record that no clothes would ever fit this Muscle Lord's body. Ever.

Tacklecrush led the charge in the legendary Assault on Black Friday Sale Rack. [New Year's Day Sale Rack in the PAL version.] Many foes stood before him, but with a single tackle, he scattered them as a tornado. None could overtake him as he plunged through the fray, leaving only wind and failure behind. Rock hard were his shopping muscles, but none were equal to the hard lock on his wallet.

Pullurp was the most celebrated of all athletes who participated in the Ultrapump Games. He lifted his body up with such force that onlookers feared it would crack the firmament. He thrust it downwards with such enthusiasm that he threatened to break the earth's mantle. And yet, his lone failure came on the parallel bars, where the Double Glute Spin eluded him all his life.

In the war with the Dark Cholesterarians, Ballance secured victory with signature moves. He rolled like a thunderstorm, driving his foes before him then grinding them to dust. His vantage from atop a balance ball allowed him to keep his equilibrium in both battle and life. And his form. His form! His sculptured body would be a template for those who aspire to buffness.

The opening of the Great Sauna would never have come to pass without Longbathes. None could match his knowledge of the bathing arts, and he was rightfully revered for it. Claiming the temperature needed to match that of hot magma, he pioneered scalding therapy. No one could approach his love for soaking, and so he soaks here, eternal and pruney. 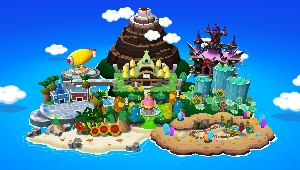 Click on an area to open the relevant article.
Retrieved from "https://www.mariowiki.com/index.php?title=Mount_Pajamaja&oldid=3833467"
Categories: