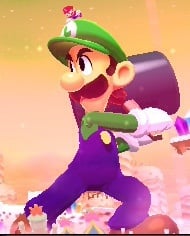 Hammer Chop is a special move performed by Giant Luigi in Mario & Luigi: Dream Team. The move icon is a hammer pointed horizontally with an arrow horizontally curving in front of it, and it is next to the Hammer Uppercut icon (for the second battle and onwards) in the Hammer section of the attack menu.

When it is used, Giant Luigi approaches the enemy and pulls his hammer back. The player must then quickly slide the stylus across the Touch Screen to make Giant Luigi smash his hammer into the enemy. The faster the player slides the stylus, the more powerful the attack and the greater the rating the player gets, ranging from "OK!" to "Excellent!" ratings. As well as doing damage, the Hammer Chop also knocks the target enemy into the background, making this attack more advantageous depending on the situation.

Slide fast for a harder hit! (Slap foes to the background!)