Heavy Zest is a character that appears in Mario & Luigi: Dream Team, as one of Big Massif's four Hooraw disciples that must be fought in the "Beef-off". He is a cheery and hyperactive Hooraw with orange curled hair and pants. Of the Hooraw Disciples, Heavy Zest is average, he has the second-to-lowest HP and POW, but has the second-to-highest DEF and SPEED. Heavy Zest first appears when Mario and Dreamy Luigi show up to the dream tour center, Big Massif sending him and the other three to test them before they can face him. When the four of them leave to hide, Heavy Zest heads down the orange pipe.

In battle, Heavy Zest surrounds himself with Hooraws. To win the battle, Mario must defeat Heavy Zest and any and all Hooraws within three turns. If the player fails to win within the given time, the referee appears and gives both Mario and Heavy Zest a Max Candy (if Heavy Zest is defeated he is instead given a 1-Up Mushroom that does the same), effectively "resetting" the battle, and gives the player the option to either keep going or quit the battle. 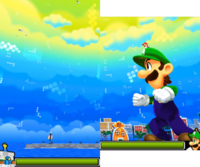 A copy of his house seen near Luigi's feet
Retrieved from "https://www.mariowiki.com/index.php?title=Heavy_Zest&oldid=3761968"
Category: