Dreamy Mario is a clone of Mario that appears in Mario & Luigi: Dream Team. He is encountered in the Dreamy version of Pi'illo Castle. Dreamy Mario was created by Antasma to defeat Mario and Dreamy Luigi while his creator watches over him doing so in a cloudy form with Princess Peach in his grip. He serves as the first boss fought in the Dream World, and is identical in appearance to his counterpart barring the purple cloud that surrounds him. As he is created at the start of the battle and destroyed at the end, he has no overworld sprites. In battle, he is capable of creating various copies of himself and using them to attack Mario.

In battle, whenever all the clones are defeated, Dreamy Mario will spawn a complete new set of about seven to ten clones and try to shuffle himself amongst them to avoid direct attacks from the real Mario, much like the Beta Kretin from Mario & Luigi: Bowser's Inside Story. If Dreamy Mario is directly attacked by Mario, all the clones vanish, but Dreamy Mario will immediately recreate the clones and reshuffle himself in the mass. Any weak clone Mario ends up attacking, either as a counter-attack or a direct one, will fly back at Mario from the top right corner of the screen after the attack, at which point the clones must be dodged by jumping over their body as they hit the ground. 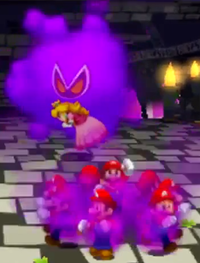 Dreamy Mario will primarily attack with a herd of weak clones by having them charge at Mario, who can dodge them by jumping. If the real Dreamy Mario is stomped during this attack, the attack will instantly stop. Additionally, a Brick Block may randomly appear during this attack to prevent Mario jumping over or onto the incoming clone, although Mario can destroy it with a single hit, akin to one of Bowletta's attacks in Mario & Luigi: Superstar Saga.

Occasionally, Antasma will directly attack by moving back and forth while laying out a stream of Coins interspersed with fireballs and the occasional Mushroom, which will heal Mario upon contact. Mario can avoid damage by jumping over or moving between the fireballs. Getting hit by these fireballs not only causes Mario to take damage, but also causes him to drop some coins. Antasma may taunt Mario to get him to pursue him into the background, where Antasma will then let out streams of purple gas to obscure a vertical line of Mario's view and make it more difficult to spot and jump over or avoid the approaching waves of invincible Mario clones running towards him from further on in the background. Getting hit by the invincible Marios or surviving long enough will end the attack, with the former ending in Mario taking damage.

Mario eventually manages to destroy his 'dreamy' counterpart, but ultimately the battle does not accomplish its intended purpose of retrieving Peach: Antasma uses his sonar beams to blow a hole in the floor all the way to Dream's Deep and flees down said hole with Peach, closing it soon after. The hole's closure would mark the last time the Bros. would see Peach until they arrived at Dream's Deep through Dreamy Mushrise Park.