POW-Down (also known as ATK-Down) is a status ailment that has appeared in various RPGs. It stands for "Power-Down".

In Mario & Luigi: Superstar Saga and Mario & Luigi: Superstar Saga + Bowser's Minions, some enemies have the ability to change Mario and Luigi's stats, like Starkisses. If their attack power goes down, they will not be able to do as much damage with their attacks. The ailment is indicated by a red burst with an arrow pointing down. Luigi's Advanced Thunder Bros. Bros. Attack can give this status effect to enemies.

POW-Down is the same status ailment in Mario & Luigi: Partners in Time. It is indicated by a shrinking red circle around the affected. Ice Flowers can randomly inflict this status ailment on enemies. 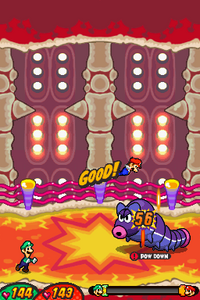 POW-Down returns in Mario & Luigi: Dream Team. By using a Virus-Starter Badge combo, Mario and Luigi can decrease the enemies' attack power. Some enemies and bosses, such as Mammoshka, can inflict this status on the Bros as well.

In Paper Mario, Mario can give enemies the Tiny ailment by using Shrink Stomp. Also, Mario can receive this ailment from Hammer Bros and Bzzaps!. Also, the Special Move Chill Out can inflict this status on enemies and bosses.

In Paper Mario: The Thousand-Year Door, Mario can once again inflict the Tiny status effect by using Shrink Stomp. There's an unused "Attack has dropped!" status in the game's coding under the name "battle_common", which is indicated by a nervous face if the latter was hacked while using a Thunder Rage in battle. Mini-Yoshi can also do this by using Mini-Egg, and the item Mini Mr. Mini can shrink enemies as well.