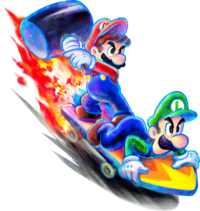 Mario and Luigi performing the attack.

Jet-Board Bash is Mario's fourth available Bros. Attack in Mario & Luigi: Dream Team, being the last Mario can obtain by collecting Attack Pieces. This attack is obtained once all the Somnom Woods Attack Pieces are collected, and 12 BP is consumed upon use. The attack targets and damages only a single enemy on the ground. It bears slight resemblance to how Mario can surf on Luigi in Mario & Luigi: Superstar Saga.

Upon use, Mario and Luigi run away from the enemies, eventually stopping for Mario to pull out a skateboard equipped with a rocket engine and throw it in front of Luigi. Luigi will board it lying down on his belly and Mario will hop on top of him, where he starts the engine. The player must press and hold

to accelerate the engine as it goes forward - the flame on its back will turn blue if it reaches its top speed. When the board reaches the target enemy, Mario prepares one big hit with his hammer. When he swings his hammer directly in front of the enemy, the move will do the full damage with an "Excellent!!" hit effect if the player presses the

button just before Mario hits. If the move is executed before the board reaches the enemy, or when Mario just passes the enemy, the move will do less damage with "Great!", "Good!", or "OK" hit effects; sometimes it fails to harm the enemy at all when this happens. If Mario is unable to strike when the Bros. reach the enemy, the Bros. will hit the enemy, dealing minimal damage, flinging Mario off-screen and the causing the skateboard to slowly move backwards from the rebound with Luigi on board. Failing to hold

until the board reaches top speed will result in the Bros. moving much more slowly, and consequently dealing decreased damage.