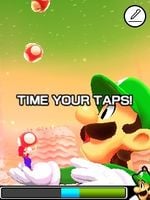 The Rhythm Mushroom is a special move performed by Giant Luigi in Mario & Luigi: Dream Team. The move icon is that of a Mushroom and it is available next to the Drill Stomp icon in the Bros. Attacks section of the giant battle menu.

When used, Mario jumps off of Giant Luigi's head and onto his hand, then takes out a Mushroom. Mario will throw the Mushroom in a high arc into Giant Luigi's mouth, throwing two more afterwards, the with pace at a set rhythm. Mario will pause after the three Mushrooms are thrown, then resume and throw five more Mushrooms in the same fashion as before, the attack ending afterwards. The player must focus the timings of Mario's throws, then tap the touch screen in a repeated rhythm, right when the Mushrooms touch Giant Luigi's mouth. The more Mushrooms Giant Luigi consumes, the more health is restored by this move and the better the attack rating is. Eating all eight Mushrooms results in an "Excellent!" rating. After this is done, Mario will have to rest for a few turns.

Additionally, in the battle with Robo-Drilldigger in Dreamy Dozing Sands, Prince Dreambert will automatically suggest that the player uses this move to heal after an unavoidable attack by the opponent. Regardless of whether or not Giant Luigi is at full health after using it in that instance, Dreambert offers Giant Luigi a chance to try the move again and again until the player chooses to continue the battle. The tutorial does not count as a turn and the player can then attack Robo-Drilldigger.

The Rhythm Mushroom cannot be used in the Battle Ring, meaning that the player must rely on their pre-set health or on the mushrooms that appear during the Zeekeeper X and Bowser X battles (these mushrooms do not appear in Hard Mode however).

Attack in tandem with Mario! (Touch Mushrooms to heal up!)