This article is about the attribute used in Mario RPGs. For the block referred to as "POW" in various games, see POW Block. 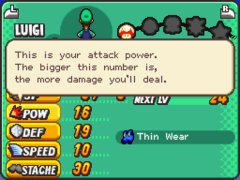 An explanation of Power in Mario & Luigi: Bowser's Inside Story

“POW shows a character's strength. The bigger that number is, the more damage the character will deal in battle.”
—Guide, Mario & Luigi: Superstar Saga + Bowser's Minions

Power (often shortened to POW), known as Attack, Attack power, or ATK, in the Paper Mario series is a stat that appears in Super Mario RPG: Legend of the Seven Stars and every entry in the Mario & Luigi series and Paper Mario series. It is used by every playable character and affects how much damage their attacks deal to enemies in battle. In certain games, enemies also use power, which decides how much damage they can inflict on the player. A higher amount of power equals a higher amount of damage, though power is also affected by the target's Defense. In the Paper Mario series, the player's power cannot be increased permanently, while in other games, it is directly increased as each character levels up and, in Mario & Luigi: Bowser's Inside Story, Mario & Luigi: Dream Team, and Mario & Luigi: Paper Jam, through Power Beans. There are multiple ways of temporarily increasing power, including types of equipment, such as the Power Plus Badge, certain abilities, such as Power Lift, or certain items, such as the Power Punch. Statuses such as POW-Up or Huge (depending on the item) appear when power has been increased. Likewise, there are also ways of decreasing power: for example, Mini Mr. Mini can be used to inflict Tiny on enemies and conversely, several enemies have attacks that inflict POW-Down or similar statuses on the player.