After being defeated, the guardian takes on a new form based on Princess Peach; it says that it has switched to a temporary observation protocol based on Bowser's most carefully preserved memory. 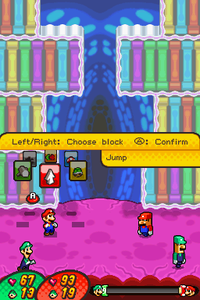 Both Memories fight alongside each other; however, both of them need to be defeated in order to win the battle.

Bowser Memory M has two attacks which involve a digital Super Mushroom (Mega Mushroom in the remake) and a Super Star. When using either Mushroom, he will grow to a few times his normal size and strike a series of red or green Big Blocks above his head. When the block is struck by him, the resulting debris will fall on the bro whose color matches it; the type of jump also indicates the target, with regular jumps knocking debris at Mario, and spin jumps knocking bricks at Luigi. The debris can be deflected using the Hammer, and may make a brother Dizzy if it hits. Bowser Memory M will then shrink back to normal (after a digi-Koopa bites him in the original version).

When using a Super Star, Bowser Memory M will become invincible and dash straight towards one bro or other. The brothers can avoid this attack by jumping over him as he runs underneath, but if Mario or Luigi is hit, he will be knocked off the screen (but will automatically avoid the rest of the attack) and re-emerge when the invincibility wears off. However, a coin may occasionally appear, and Bowser Memory M will go after it. If a coin appears above a brother's head, Bowser Memory M will jump and grab the coin, and the bro. should refrain from jumping (unless they jump before Bowser Memory M does and collects it, adding to the coin drop at the end of the fight). A coin may also appear in front of a bro, usually the one not in his line of sight; in that case, Bowser Memory M will switch targets.