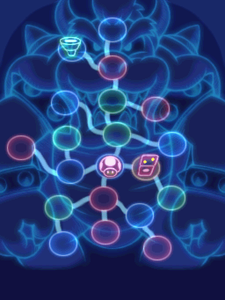 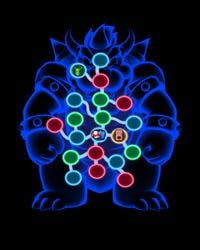 The map in the remake

Bowser's body is a location from Mario & Luigi: Bowser's Inside Story and its remake. After Bowser, under the influence of the Vacuum Shroom, inhales everyone at Princess Peach's meeting, Mario and Luigi must search for the missing princess within his body.

On the map of Bowser's body, large areas that typically contain many enemies are represented by green circles. Smaller areas that consist of a few screens are denoted with blue circles. Single-screen areas where Mario and Luigi play minigames are marked with red circles. Challenge Node, the only location with a unique color, is marked by a yellow circle.