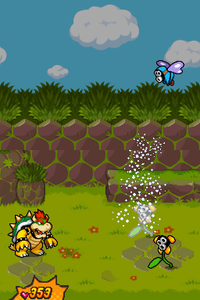 Flifits attack by spitting Sneeds at their target; Bowser must counter the attack depending on the angle it fires at. If the Flifit keeps its head still, it spits the Sneed at the ground, and Bowser must duck into its shell so it bounces over his head. If the Flifit tilts its head backwards, the Sneed will fly straight at Bowser, who must counter with a punch; the Sneed will be deflected upward and fall onto Bowser, which he can avoid by ducking in his shell. Using the inhale ability will cause the Flifit to wilt, lowering its defense; after a few turns, a butterfly-winged Snifit will appear to water it and restore it to normal.

They use the same attacks when fought by the Mario Bros.; in addition to using the above tells, the Flifit shakes its leaf down if targeting Luigi and up when targeting Mario. The straight shots must be dodged by jumping, while the angled bouncing shot must be deflected with the Hammer. Sneeds that manage to hit the brothers will join the fight, and a Sneed may eventually bloom into another Flifit.

Flifits, being plants, are weak to fire attacks, and may drop a Hot Drumstick or Syrup Jar upon defeat; in the remake, the Hot Drumstick has a higher chance to drop, and the Syrup is replaced with Cheese.