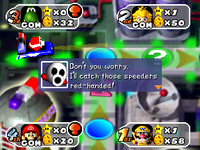 The Snifit Patrol in Mario Party 2

The Snifit Patrol, also referred to as Shy Guy Cops,[1] is the police force of Space Land in Mario Party 2 and Mario Party Superstars. Players can pay them to set up a "speed trap" when they come across a unit standing by. They chase after speeding Whomps and Thwomps to ensure the safety of the players playing on the board when a player lands on a Happening Space; when a speed trap is set, the chase lasts longer.